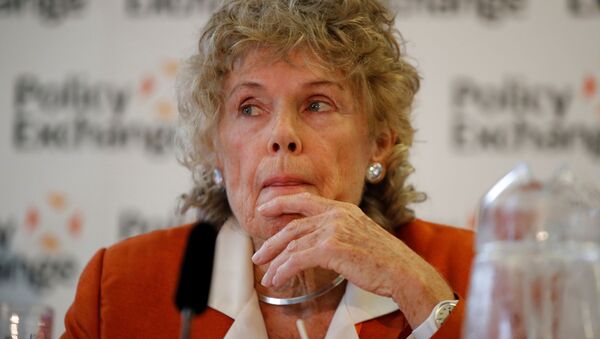 Vauxhall MP Kate Hoey has faced opposition from within her own party for her strong support for Brexit prior to and throughout the EU membership campaign. She claims that euroscepticism is a tradition within the Labour movement, which the current leadership once supported.

Labour MP and Brexit maverick Kate Hoey has hinted at support for the Brexit Party while talking to Spiked Online on Sunday.

The Brexit Party has maintained a position of support for a no deal as the best way to secure a beneficial trade deal with the European Union, while the Labour Party opposes no-deal and as of the 2019 Labour Conference, supports a neutral stance in a second referendum between a Labour Withdrawal Agreement and remaining in the EU.

Hoey also expressed her disappointment in the changing attitude towards the European Union of the Labour Party, claiming that Jeremy Corbyn had a "real opportunity" to be "absolutely clear as he originally was that we were going to leave, we wanted to get a good deal but we have to get out."

"I am disappointed now that he's been pushed the way he has but he has done his best and the irony is that the people who are against him have used the EU issue as a way of getting at Jeremy."

The Vauxhall MP has said that she will not be standing at next election and has faced an immense backlash from the membership of her own party for voting with the Conservative government over Brexit.  She did however say that she "will still be involved in politics one way or another.”

The labour movement and the Labour party have a history of opposition to the European Union on the basis that it represents a form of continental wide capitalism. This attitude was represented by the late Labour veteran and staunch socialist Tony Benn, who adamantly opposed what he described as the "giving away" of democratic rights to unelected bodies in Brussels.

Jeremy Corbyn too also held strong europsceptic views, telling a crowd in Ireland in 2009 that the EU is a "military Frankenstein" that will make them vote twice on the Lisbon treaty and, as recently as 2019, saying he believes that the UK could be better off outside the EU with a Labour Withdrawal agreement.

​Despite the victory of the policy that a Labour government should take a neutral stance in a second EU membership referendum, the leadership's policy has shifted significantly since the vote to leave the EU was made in 2016. Originally the party called for an immediate triggering of Article 50 and support for a "jobs first Brexit", the position has since transformed into supporting a second referendum with a remain option on the ballot, if the party were to win power.

The vote in 2016 to leave the EU crossed party lines, especially within the Labour Party which saw up to five million of its supporters in the subsequent general election the following year voting to leave.

"When I saw how the EU was developing it was very obvious that what they had in mind was not democratic. They're building an empire and they want us to be a part of it - I don't want that!" #WednesdayWisdom pic.twitter.com/a1bodIlUdn

​Mirroring the neutrality policy of the current Labour leadership, the Harold Wilson Labour government also stayed neutral throughout the 1975 Referendum on UK membership of the Common Market, the structural predecessor to the EU. That campaign saw Jeremy Corbyn advocate for a leave vote and the then Conservative leader Margaret Thatcher supported remaining in the Common Market.