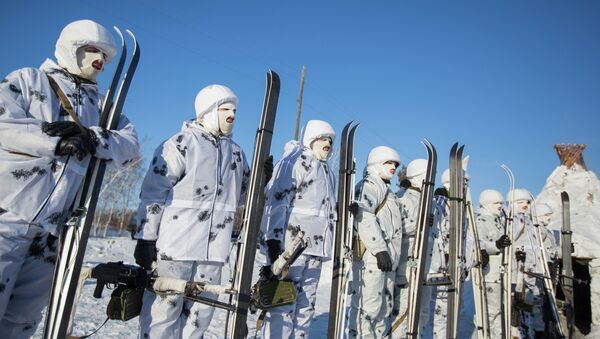 © Sputnik / Igor Ageyenko
/
Go to the photo bank
Subscribe
An independent Norwegian news outlet previously claimed that Russian special forces had been spotted in the Arctic archipelago of Svalbard and even mainland Norway.

The Russian Embassy in Norway has dismissed reports of Russian special forces in Norway, published by the news outlet AldriMer, as “fake”.

The Russian diplomatic mission suggested that the publication is “nothing but a gross provocation”.

“We consider the publication as part of the systematic work being carried out in certain circles in Norway to paint Russia in the image of the enemy”, the Russian Embassy said on its Facebook page.

The embassy also suggested that this canard may be an attempt by some forces to harvest more resources to fight the fictitious and trumped-up “Russian threat” ahead of the approval of Norway's new defence budget.

Such methods, the Russian diplomats emphasised, are not consistent with journalistic ethics.

Other anonymous sources from the intelligence community of Norway and other NATO countries claimed that the Russians, acting under the guise of civilians, allegedly scouted the area and studied important infrastructure.

Norway's Defence Ministry declined to comment, yet suggested that the appearance of the Russian soldiers might be linked with the military drills conducted by the Russian Navy. Between 1 and 9 August, Russia held the 2019 edition of its Ocean Shield military drills, which took place in the Baltic, the Norwegian and North Seas. The stated goal of the drills was to train inter-fleet cooperation.

According to the 1920 Svalbard Treaty, Norway has sovereignty over the archipelago, whereas its signatories, including Russia, retain the right to engage in commercial activity on its territory.