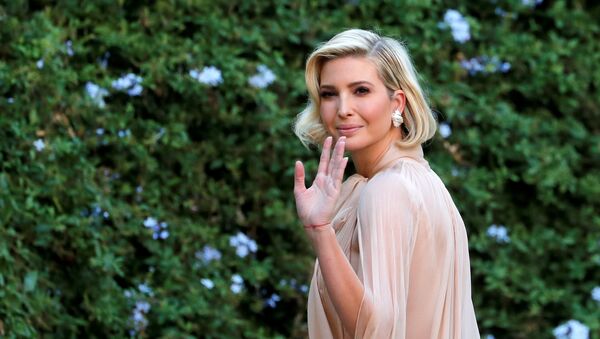 A defensive Sunday family photo by Ivanka wrapped up a tough week for the Trumps, as the Master of the (White) House is battling for the future of his presidency with an impeachment process underway.

US First Daughter Ivanka Trump has shared a Star Wars-themed tweet to make the case that her family is strong and united, but received a unexpected rebuke from one of the main ‘characters’ of the saga.

Ivanka, dressed in a black gown, posed for a photo alongside her husband, Jared Kushner, and their three children; one of them, presumably the three-year-old Theodore, was dressed as a stormtrooper.

“The Force is strong in my family,” she wrote in the tweet she posted on Sunday, days after her father became the target of an impeachment inquiry.

The Force is strong in my family. ⭐️ pic.twitter.com/oT0jFfy5Lb

Her tweet drew the ire of Mark Hamill, the actor who played Luke Skywalker in the Star Wars films. “You misspelled ‘Fraud,’” he wrote in response, adding the hashtag #GoForceYourself.

The force proved stronger with Hamill’s response, which has racked up over 340,000 likes in mere hours – around eight times as many as Ivanka’s.

Mommy, why does Luke Skywalker hate us?
Because we are terrible, terrible people, son.

This made me happy. She should not even be allowed to utter such a sacred verse.

I think this may be my favorite tweet of all time.

When Luke Skywalker is against you... you have to accept the fact that you totally suck.

I cannot love @HamillHimself more for this erfect tweet. #GoForceYourself

…many found his lack of faith in the US president’s family – and his mockery of a child – disturbing.

You sure owned those kids, Mark. Good one.

I take it back what I said about the last Jedi. Seems Luke is the type to cut down kids over things their family did.

What a cheap shot you sad bitter man.

Goddamn, Mr. Hamill. A kid in a Star Wars costume isn't political. People are allowed to like Star Wars.

The House Democrats announced the start of an impeachment inquiry on Tuesday on the heels of one of the biggest controversies of the Trump presidency. A yet-unknown whistleblower had filed a complaint following Trump’s July phone conversation with Ukraine’s president, Volodymyr Zelensky; the US president is being accused of pressing Zelensky to investigate Hunter Biden, a son of former Vice President Joe Biden who had sat on the board of directors of a Ukrainian energy company.

Joe Biden is Donald Trump’s as-yet most likely rival in the 2020 presidential election, and the Democrats suspect that Trump’s actions amounted to seeking foreign help for his re-election. The White House notes on the July call confirm that Trump asked Zelensky to investigate the role Joe Biden allegedly played in stopping a criminal probe into Hunter Biden and the activities of his company.

It remains to be seen and proved, however, whether there had been any “pressure” from the US president. Days ahead of the call, Donald Trump froze nearly $400 million in military and security aid to the Ukrainian government, a move some Democrats believe Trump used as leverage to press Zelensky. The POTUS said he had held back the money over fears of bureaucratic corruption within Ukraine’s government and denied any wrongdoing on his part.