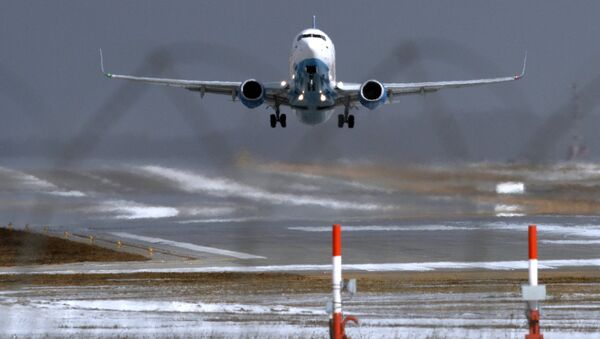 © Sputnik / Maksim Blinov
/
Go to the mediabank
Subscribe
International
India
Africa
Boeing’s 737 Next Generation (737NG) is the latest aircraft from the company mandated by the Federal Aviation Administration (FAA) to undergo inspections, following a series of reports revealing a “cracking issue” in a critical part of the plane’s equipment.

Just months after Boeing announced a pre-tax loss of $5.6 billion in its second quarter of the year due to the groundings of its 737 MAX fleet, the company has found itself in another worrisome situation due to structural cracks found on its 737NG jetliner’s “pickle fork” - the primary attachment between the wing and the plane’s fuselage.

"The FAA will require operators of certain Boeing 737NG jetliners to conduct inspections for structural cracks. Boeing notified the agency of the matter after it discovered the cracks while conducting modifications on a heavily used aircraft,” the FAA told KOMO News in a Friday statement.

“Subsequent inspections uncovered similar cracks in a small number of additional planes. The FAA will instruct operators to conduct specific inspections, make any necessary repairs and to report their findings to the agency immediately."

It’s worth noting that no deaths or injuries have been reported in connection with the issue on the 737NG, which is a different aircraft than the embattled 737 MAX.

"Safety and quality are our top priorities. Boeing has notified the FAA and been in contact with 737NG operators about a cracking issue discovered on a small number of airplanes undergoing modifications," Boeing said in a statement to KOMO.

“Over the coming days, we will work closely with our customers to implement a recommended inspection plan for certain airplanes in the fleet. This issue does not affect any 737 MAX airplanes or the P-8 Poseidon.”

The pickle fork, aptly named for its resemblance to a utensil, has two prongs on each side that connect to both the fuselage and wing. There are a total of four pickle forks on a 737NG, according to Boeing’s patent.

The cracking found on the piece of equipment is especially alarming, as Boeing claims the pickle fork should maintain its structural integrity throughout the 737NG’s lifespan.

Orlando-bound United Airlines Flight 293 returned to Denver International Airport on Sunday less than 30 minutes after takeoff due to a mid-flight engine malfunction on the Boeing 737-800, which is part of the 737NG family. Several social media users shared clips of the 737’s engine cover fluttering in the wind.