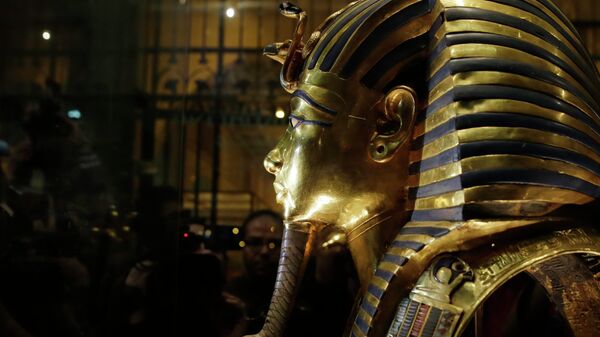 © AP Photo / Hassan Ammar
Subscribe
International
India
Africa
CAIRO(Sputnik) – Egypt’s Ministry of Antiquities announced on Monday the arrival of 331 artifacts, including 42 pieces belonging to pharaoh Tutankhamun, to the Grand Egyptian Museum (GEM), which is scheduled to open next year.

"The GEM received 331 exhibits, including pharaoh Tutankhamun’s 42 belongings, which were displayed at the Egyptian Museum on Tahrir Square," the Ministry of Antiquities said in a statement.

According to the director-general of Archaeological Affairs at the GEM, Tayeb Abbas, "the artifacts of Tutankhamun’s collection include sandals, textile, papyrus and wood containers used to preserve cereals and grains which are still in a good condition."

Abbas added that the pharaoh’s collection also contains "a set of dinnerware and a quiver of arrows used by Tutankhamun on hunting trips."

General Director of Primary Restoration at the GEM Essa Zidan, in his turn, stressed that all of the Egyptian museum's staff — including the archaeologists, restorers and security workers — "work day and night to relocate antiquities and restore them."

The opening of the Grand Egyptian Museum is scheduled for the end of 2020.