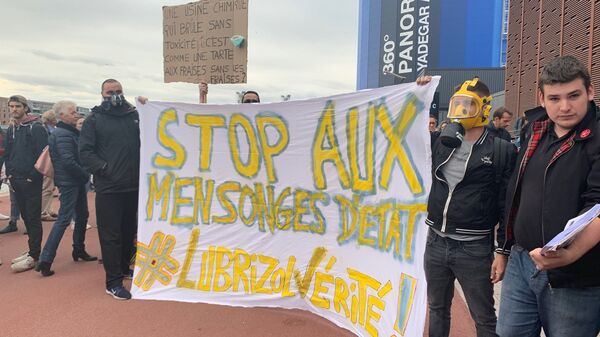 Ilya Tsukanov
All materialsWrite to the author
A major fire broke out at the Lubrizol chemical plant in the northern French port city of Rouen on Thursday, with the fire classified as Seveso, or high risk, given the potentially hazardous chemicals it processes and stores.

Residents took to the streets to stage a protest in central Rouen, France on Monday afternoon, with protesters demanding the truth from authorities regarding the environmental situation in the wake of the fire.

According to a Sputnik France correspondent at the scene, protesters chanted “We want the truth!” with some demonstratively wearing gas masks to show their concern, outside a meeting of the local prefect on the situation following the blaze.

“We are facing an industrial disaster similar to the catastrophe at Chernobyl,” one concerned protester said, carrying a banner featuring the cities ‘Toulouse, Chernobyl, Rouen, Bhopal’ – each of which have suffered major industrial disasters in past decades.  The man brought eggs and raspberries from his home, which he said he now has to destroy due to the pollution caused by the fire.

“We do not have any answers, we have nothing,” another protester complained. “We don’t have a clue what we’ve swallowed…what we have in our lungs. This is scandalous. We don’t have the test results,” the worried demonstrator added.

Another demonstrator showed Sputnik a bottle of rainwater he said had been collected in nearby Mont-Saint-Aignan in Normandy, with the bottle containing an odd yellow residue of an unknown origin. The man wanted to present the bottle to experts for analysis. 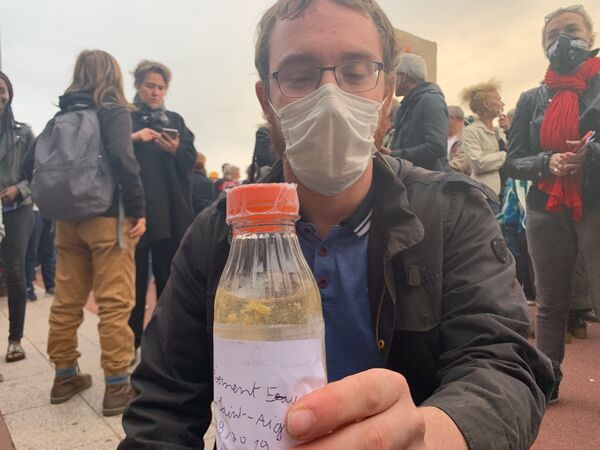 Protester holds bottle of water he said was contaminated by chemical fire in Rouen, France.
© Sputnik

“We are afraid, we need information,” a protester named Nathalie, a farmer living about 25 km outside Rouen, said. According to her, the fire caused her land to be covered in soot, with locals sensing a gas smell and smoke so strong it was “as if a neighbour’s field was on fire.” Nathalie said the fire caused headaches and the urge to throw up among locals.

Some protesters demanded the resignation of the local prefect, while others called on Interior Minister Christophe Castaner, France’s interior minister, to resign. In the aftermath of the blaze, Castaner had called on Rouen residents to remain calm and “avoid panic,” and said there was “no reason to be overly worried.” 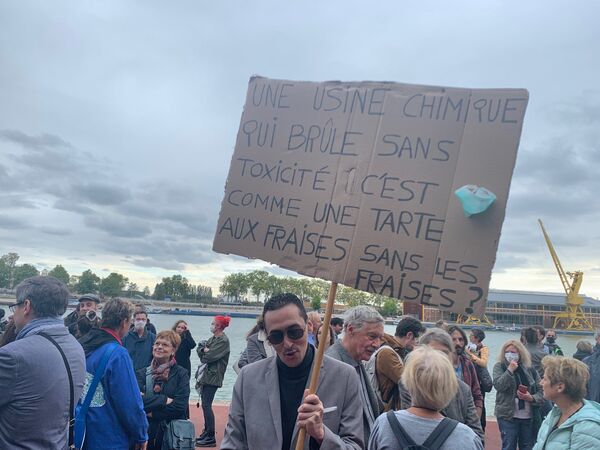 Protest in Rouen, France following a fire at the Lubrizol chemical plant.
© Sputnik

A major blaze broke out on the night of September 25-26 at a major chemical plant in Rouen. The plant, owned by Ohio-based chemicals giant Lubrizol, owned by billionaire investor Warren Buffett, was known to have engaged in the storage and synthesis of phosphorous and organosulfide products for use as additives for lubricants. Over 140 firefighters battled the blaze for several hours before successful extinguishing the fire.

French prosecutors have opened an investigation to determine the cause of the fire. No injuries or deaths have been reported.  The fire was said to have damaged a storage facility, drumming warehouse and administrative building.

On Sunday, as a precaution, regional authorities issued a decree banning the harvesting and sale of crops and produce of animal origin in the region, with about 100 districts in the area surrounding Rouen feared to have been affected.

The Rouen factory already made the news in January 2013 when it was discovered that the factory had leaked large amounts of the gas mercaptan. Winds took the foul-egg smelling gas as far as Paris and across the English Channel into southern England. In 2015, another incident involving the plant saw about 2,000 litres of mineral oil leak into the local sewer system.