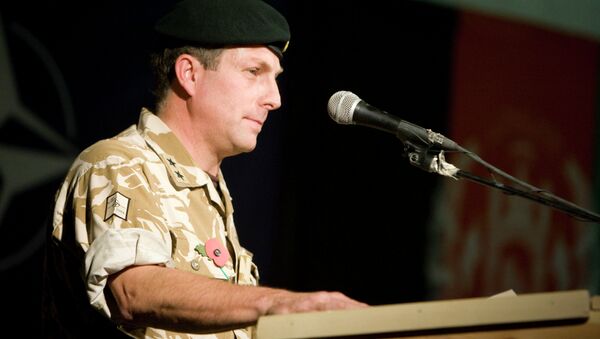 © Flickr / ResoluteSupportMedia
Subscribe
The UK’s Chief of the Defence Staff Nick Carter has claimed that Britain is at war every day due to constant cyberattacks from Russia and other countries.

According to Adriel Kasonta, a political consultant and foreign affairs analyst based in London, Carter's statement is an exaggeration.

Sputnik: The Chief of the Defence Staff General Sir Nick Carter has said that Britain is “at war every day” due to constant cyber-attacks from Russia and other countries. Is there a real threat and what are these cyberattacks he is talking about?

Adriel Kasonta: I think that Mr Carter is slightly exaggerating the threat - because he clearly stated in his speech or statement - that it is hard to draw a clear line between competition and conflict. So, I think that it is another way for finding a demon or a villain to portray China and Russia as the hostile countries which are attacking the United Kingdom and the United States in order to justify the expenses to attack them in retreat. So, I think that it is nonsense - because we know the United States and the United Kingdom are both spying on its own friends and allies. And I think that in the digital age every single country - regardless whether it is a hostile country or not - is spying on each other. So it is entirely a normal state of affairs in my opinion.

Sputnik: Is there any correlation between budget expansion in the ministry in the UK and these threats?

Adriel Kasonta: Yes, I think that it is a justification to increase the spending and the Ministry of Defence - because in order to get additional money for spending in the Ministry of Defence as in any other department, when it comes to the finances - you have to justify your query or request for more spending. So, in order to spend more money, you have to justify and create a very lofty story to support your statement and your request. So, the answer to your question is yes.

Sputnik: General Carter said – quote – ‘Our opponents are using deniable tactics and capabilities against us and we have to find a way of responding to that and indeed do a bit ourselves’. Will this mean a further expansion of NATO in Europe and using this as leverage to create more sophisticated warfare or cyberwarfare?

Adriel Kasonta: I think that we have to bear in mind that the two gentlemen present at the conference are arch warmongers. Mr Petraeus and I were reading the mention of Tony Blair – who, according to my knowledge, is a war criminal, who send the troops here from the United Kingdom to Iraq on false allegations of having a weapon of mass destruction by Saddam Hussein. So, I do not believe that these gentlemen are credible - in the first place. And going back to your question - we don't know what will happen with regard to NATO. We know that both America and the United Kingdom are willing to expand NATO without any limits. So that the current state of affairs - we know that NATO is heading toward the borders with Russia - but we know that China is posing a serious threat - if we refer to what General Petraeus said about China and its economic life over the last 40 years as ‘unprecedented in human history’. And we know that NATO portrayed China as the new USSR. So I do believe that either they will try to incorporate Russia which is not the case because Russia and Putin himself is not perceived as a villain and as the greatest gift to NATO to justify their spending. So I think that NATO - if they will expand any further, they are either having a war with Russia and if they incorporate Russia, then China will automatically become an enemy of Russia and the rest of the NATO. Because we know that NATO became not a security alliance, but a warmongering alliance and because of its actions the actions are not defensive but offensive. So, yes, in terms of cyber warfare, information warfare, I think that NATO will invest a huge amount of money to - as Mr Petraeus and then the chief of the MOD in the United Kingdom stated - they need to bring back the lost art of deception. So I think that NATO will increase spending in supporting the deception units within its structure.

Sputnik: You mentioned the Iraq war, and the CIA director praised the UK’s Chief of Defence Staff work in Afghanistan and he also mentioned Tony Blair as being “a tremendous wartime leader”. What’s your general assessment of such statements and how will this speech impact the US and NATO allies’ policy towards current conflicts in the Middle East, for example?

Adriel Kasonta: I think that it is showing – perfectly showing the ethics and morality of Mr Petraeus. I think that he has a huge audacity to somehow praise Tony Blair - who as I said previously is a war criminal. We know that both he and previous president of the United States Mr George W. Bush sent their troops attacked Iraq and sentenced Saddam Hussein on false allegations. So I think that with regard to the war of ideas - I think that the greatest threat for the United States and the United Kingdom is the openness and free channels of information in the digital age - where people all over the world have a free access to internet and they can see the information from different sources, like the Russia Today, Sputnik News, CGTN in China - and this is the greatest threat - because it is the counterbalancing the world view on certain issues - and both a state of affairs for the U.S., American alliance is when they are disrupting the rest of the world and they are setting the rules of the game. But in the digital age, the rules of the game slightly changed - because we have open access to the internet and the deception is quite hard to be put in place and deceive the people.