Boris Johnson Will be ‘Sacked’ by the Queen If He Breaks The Law, Ex-Tory Attorney General Warns 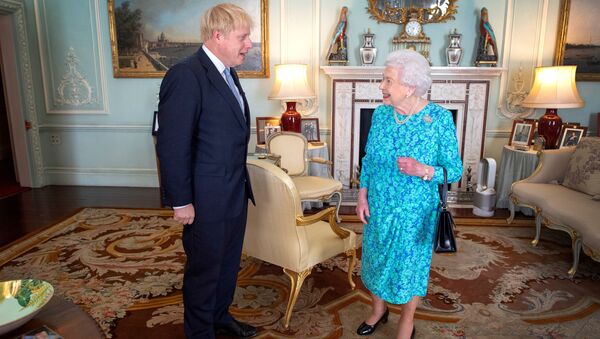 Svetlana Ekimenko
All materialsWrite to the author
UK Prime Minister Boris Johnson has made no secret of his “do or die” pledge to take his country out of the EU by 31 October with or without a deal, in defiance of the recently adopted anti-No Deal legislation demanding he seek an extension to the Brexit process by 19 October unless he succeeds in brokering a new agreement with Brussels.

Former Tory attorney general Dominic Grieve has warned UK Prime Minister Boris Johnson that if he acts in violation of the recently-adopted anti-No Deal legislation he will not be able to keep his job.

Grieve told Sky News if Johnson tried to disregard instructions from the courts the Queen would be forced to step in and dismiss him.

MPs passed legislation dubbed the Benn Act this month, spearheaded by Labour MP Hilary Benn, and backed by Labour and rebel ex-Tories, that demands the prime minister ask Brussels for a three-month delay to the Brexit date - if there’s no agreement by 19 October, straight after a crunch EU summit.

The Prime Minister, who has adopted a “do or die” stance on the issue of taking the UK out of the EU by 31 October with or without a deal has repeatedly ruled out asking for an extension.

However, Johnson and his allies have insisted that the government will comply with what is on the UK statute book.

This led many critics to decide that Boris Johnson might try to find a way to override the law, with some MPs increasingly believing the PM is considering using the Civil Contingencies Act 2004, which grants special powers in the event of a national emergency.

However, according to Grieve, Johnson would not be allowed to get that far.

"He would be taken to court and a writ of mandamus would be issued against him and he would be told as a matter of law that he has to write the letter. The case could go to the Supreme Court and I suspect the courts could do with it very quickly."

"At that stage the cabinet secretary and the civil service would refuse to work for him, I assume the Attorney General and the Lord Chancellor will have resigned because it is such a flagrant breach of the law."

Questioned as to what would happen if Johnson refused to bow to the court's order, Grieve said:

“He will be out in five minutes. He will be dismissed.”

Asked if that meant the monarch would be required to step in, the former Tory Cabinet minister replied:

“Yes. I think it is a rather hypothetical position."

Grieve, however, is convinced no Prime Minister would go so far as to face dismissal by the monarch.

"I think that quite a few things between now and then which would prevent it from happening. If it is not the present Prime Minister who ought to do it then it will have to be somebody else.”

Earlier on Monday, Sajid Javid, Chancellor of the Exchequer, suggested the government has a plan to try to bypass the Remainer legislation against a No Deal Brexit.

The Chancellor refused to reveal details of how Boris Johnson intended to get around the law.

“It's part of our strategy to leave on October 31st – we are clear we will be leaving. It's our policy.”

The Remain coalition is allegedly meeting on Monday to conceive a way to force Prime Minister Boris Johnson to request a Brexit extension as early as this weekend, after opposition parties failed to agree on holding a confidence vote in the Prime Minister, reported The Telegraph.

It was claimed Labour leader Jeremy Corbyn would be meeting in his office with Jo Swinson, the Lib Dem leader, Ian Blackford, the SNP Westminster leader, and representatives of Plaid Cymru, the Greens and the Independent Group for Change to discuss amending the legislation to bring forward the date to 5 October when the Prime Minister legally has to ask Brussels to extend Article 50.

A defiant Johnson, who reportedly plans to suspend Parliament a second time in order to press ahead with plans for a Queen’s Speech on 14 October, headed out to the current Conservative Party’s annual conference in Manchester fending off onslaughts from all sides.

Johnson brushed off further claims about his association with businesswoman Jennifer Arcuri, while refusing to tone down his rhetoric after being accused of “inflammatory” speech and aggressive use of language, warning it could incite violence against opponents, as he described legislation requiring him to ask for yet another Brexit delay as a “Surrender Act”.

The Tory conference opened days after the Supreme Court’s ruling that Boris Johnson’s decision to prorogue Parliament was unlawful, and the order was "void and of no effect".