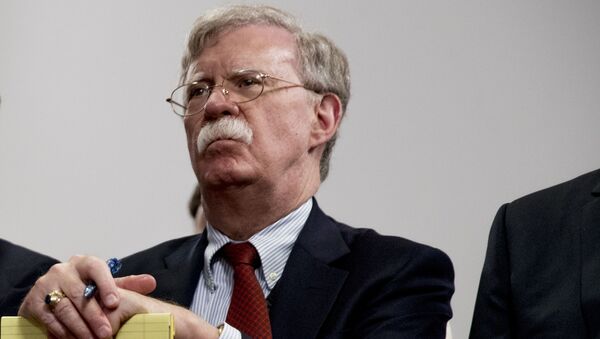 Even though US President Donald Trump showed him the door earlier this month, former national security adviser John Bolton hasn’t backed away from his differences with the president, telling academics and policy wonks Monday that North Korea won’t give up nuclear weapons and regime change may be the only option.

It’s been one of the most contentious positions taken by Trump internationally: a decision to back away from his “fire and fury” rhetoric of 2017 and engage Pyongyang in dialogue. It’s also a rare instance in which US Democrats find themselves on the same side of the table as neoconservatives like Bolton, with both of them denouncing Trump’s patience with Pyongyang in favor of a more militant approach.

Trump fired Bolton on September 10 after 17 months on the job because he “disagreed strongly with many of his suggestions” on policy toward countries such as Iran, Venezuela and the Democratic People’s Republic of Korea (DPRK). Bolton is infamous for advocating hawkish stances, which Trump once joked would pull him "into a war.”

However, no longer confined by membership in the administration, Bolton sought refuge with like-minded war hawks on Monday, telling fellows at the Center for Strategic and International Studies (CSIS) think tank in Washington, DC, that the DPRK would never give up its nuclear weapons program, as Trump has been banking on for more than a year’s worth of negotiations.

“Perhaps they’ll be a little less delighted now that I can speak in unvarnished terms about the grave and growing threat that the North Korean nuclear weapons program poses to international peace and security," Bolton said about his former employer.

Since Trump began engaging with North Korean leader Kim Jong Un in early 2018, CSIS has served as a steady bulwark of opposition to the administration’s efforts, producing report after fantastic report alleging to have proof Kim was tricking Trump and not dealing with Washington honestly.

"There are things we should look to and have serious discussions about,” Bolton said. “One is the possibility, limited though it may be, of regime change in North Korea … If you believe, and you may not, that it is unacceptable for North Korea to have nuclear weapons, at some point military force has to be an option.”

"The strategic decision that Kim Jong Un is operating through is that he will do whatever he can to keep a deliverable nuclear weapons capability and to develop and enhance it further," Bolton continued. In a June 2018 summit in Singapore with Trump, Kim pledged to work toward denuclearization of the Korean Peninsula, taking key steps in subsequent months toward dismantling North Korean ballistic missile and nuclear weapons research and production programs.

Bolton also blasted Trump’s relaxed stance toward Pyongyang’s testing of short-range rockets in recent months. While the media has made much ado about DPRK’s testing of the weapons systems, which analysts believe to be not a ballistic missile, but a new mobile rocket artillery system similar to the US military’s HIMARS, Trump parried criticisms that Kim had violated agreements made with Washington.

However, Bolton claimed on Monday that the technology used in those weapons “by definition can be adapted to longer-range ballistic missiles. The testing that’s going on now … bodes poorly for the defensive capabilities of Japan and even the United States when you get to the intercontinental range."

He also suggested that the testing moratorium Trump claims to have won from Kim was actually not a victory at all, but that Pyongyang had simply “finished testing and can produce nuclear warheads and long-range ballistic missiles.”

Bolton’s visit to CSIS attracted no shortage of ire from old enemies, either. Mintaro Oba, a former State Department diplomat who opposed Bolton’s appointment to the position of national security adviser, told NK News Monday that Bolton’s remarks were “not surprising.”

“Bolton … has a very long record of bad policy advice,” Oba said. “I’m glad this cancerous tumor is outside the US government and not rotting our policy process from within.”