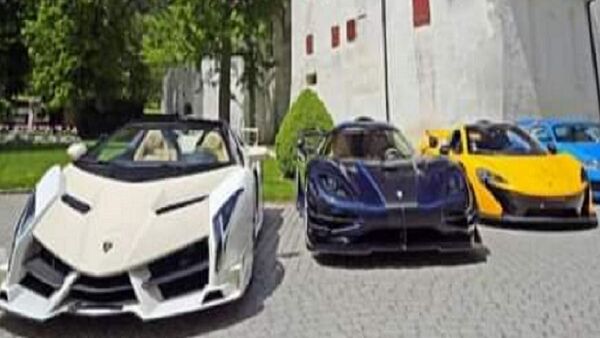 © Photo : Twitter/@IkennaEkwom
Subscribe
International
India
Africa
The vice-president of Equatorial Guinea, Teodoro Nguema Obiang Mangue, the son of the nation's long-ruling president, Teodoro Obiang, was charged with money laundering and mismanagement of public assets, which earlier to the seizure of his fleet of luxury cars.

A Swiss auction house sold Sunday 25 expensive supercars and other exotics, including Ferraris, Rolls-Royces and Lamborghinis, seized from the son of Equatorial Guinea's president over a corruption probe, according to Bonhams Geneva office.

Authorities expected to bring in on Sunday at the Bonmont Golf & Country Club in Cheserex near Geneva, Switzerland an estimated £15.2 million ($18 million). The earnings, after taxes and fees, will reportedly be transferred to a charity to benefit the people of Equatorial Guinea, The Daily Mail earlier reported.

Swiss authorities seized Mangue's hypercar auto fleet in 2016, along with a high-end yacht that was later released in an arrangement under which Equatorial Guinea agreed to pay Swiss authorities £1.1 million ($1,3 million) 'notably to cover procedural costs', The Daily Mail said.

The Swiss prosecutor's office in February cited rules allowing prosecutors to close cases in which a person under investigation had 'repaired the damage or done everything that could have been expected of him or her to make up for the wrong that was caused', according to UK-based media.

The investigation into the Equatorial Guinea president's son's - who is also the country's vice president - embezzling activities involved authorities in the United States, the Cayman Islands, France, Monaco, Denmark, the Netherlands, and the Marshall Islands, the media report said.