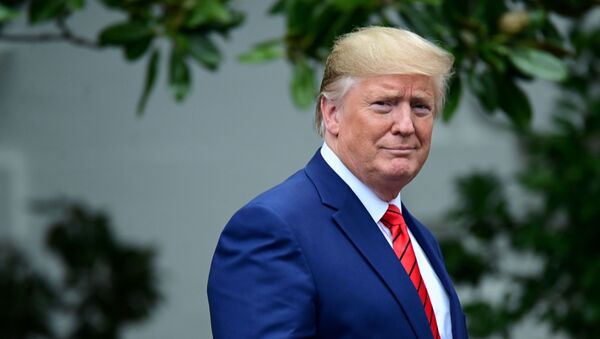 Tim Korso
All materials
Democrats officially initiated impeachment proceedings this week in the wake of a whistleblower complaint claiming that Trump had abused his power in a 25 July telephone talk with his Ukrainian counterpart by asking him to look into alleged misconduct of Joe Biden’s family, including the Democratic frontrunner himself.

The anonymous whistleblower behind the complaint against Trump's alleged abuse of power has recently agreed to testify before the House Intelligence Committee, according to its chair, Adam Schiff. His testimony is expected to constitute another vital step in the House Democrats' impeachment efforts.

As Dems in the House are ramping up their impeachment campaign against President Donald Trump, various media outlets and experts have started to speculate how the process could impact the outcome of the 2020 presidential election. While some claim that exposure of Trump's alleged misdeeds will cripple his ratings, others argue that it could backfire on the Democrats by firing up POTUS’ supporters, who might otherwise be reluctant to vote.

The Democrat-led House committees have already started making their impeachment moves, first of all by subpoenaing State Department documents from Secretary of State Mike Pompeo. They are hoping to find more evidence potentially incriminating Trump of other violations that he could have committed.

Paul Poast, an assistant professor of political science at the University of Chicago, believes that the whistleblower's complaint is already enough for many voters to make up their minds about Trump. He indicated that unlike the Robert Mueller report, this complaint and the transcript of the Ukraine telephone conversation show in a straightforward and simple way a "possible abuse of power".

"Recall that Pelosi was very reluctant to pursue impeachment on the basis of the Mueller report.  I think this was because the report was so dense and open to interpretation/spin.  Not so in this case", he said.

Dr Rubrick Biegon from the School of Politics and International Relations at the University of Kent, indicated that the shift in public opinion regarding Trump will depend on "the facts and subsequent allegations" that will emerge over the course of the impeachment investigations. He still thinks that any possible change in public opinion won't be drastic, citing Trump's approval ratings being stable throughout his scandal-ridden presidency.

Biegon added that unless a greater share of the voting public begins to see impeachment as warranted, Democratic leaders may decide to stop short of introducing articles of impeachment in the House of Representatives.

Democrats’ 2020 Success Not Guaranteed by Impeachment

At the same time, Robert James Spitzer, an American political scientist, commentator, and author, indicated that Trump's impeachment is a "mixed bag for Democrats". He noted that although impeachment proceedings may grant Democrats a foothold if they uncover more potential abuses by Trump, it still won't guarantee them of success in 2020.

"For the Democrats running for president, they have to keep talking about the positive things they would do if elected. It is not enough to simply be against Trump", Spitzer said.

He added that if the inquiry does not succeed, Trump will only gain points from the Democrats' failure. However, the Dems are still able to campaign against him based on his many controversial policies, such as environmental regulations, health care, or high deficit spending, Spitzer added.

Rubrick Biegon echoed his views, saying that the 2020 Democrats' bid should not be "merely a referendum on Trump". He added that Democrats need to expand their electorate, mobilising voters sympathetic to their positions, a segment of whom stayed home in 2016. In order to do this, they need to offer something more than just an anti-Trump sentiment, as that didn't save the Democrats in 2016, and won't in 2020.

Paul Valone, a political commentator from the US, believes that the Democrats have not initiated an impeachment process as a weapon against Trump, but rather as an attempt to deflect attention from Joe Biden, who is alleged to have pressured former Ukrainian President Petro Poroshenko into sacking prosecutor Vikton Shokin, who was investigating Biden's son, Hunter.

"One cannot possibly understate […] the level of corruption involved in in the son of the Vice President of the United States getting paid $600,000 a year for his complete absence of expertise", Valone said.

So far, Trump's response to the impeachment proceeding has been "predictably combative" and that will probably help him both mobilise his core supporters and boost fundraising efforts, Rubrick Biegon said. But even that, however, doesn’t guarantee him re-election if he is impeached by the House.

Biegon recalled Bill Clinton's approval ratings going up as he faced impeachment proceedings, but noted that there is a significant difference between him and Trump. The latter is facing accusations tied to a "national security element", unlike Clinton, who was impeached over an alleged affair with Monica Lewinsky.

"To win re-election in 2020, Trump will need to hold together the voting bloc he assembled in 2016. Even a marginal loss in support may have an outsized impact on the outcome of his re-election bid", Biegon said.

Robert James Spitzer noted that Trump’s core voters are already motivated to vote for him and don’t need to be mobilised, which impeachment could potentially result in. But at the same time, the political scientist is adamant that impeachment won't expand Trump's base.