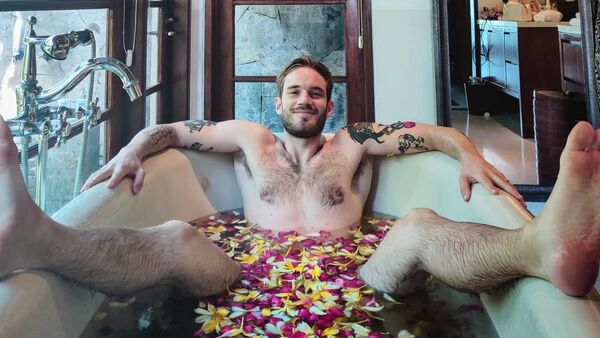 © Photo : pewdiepie/instagram
Subscribe
The most popular YouTuber of all times PewDiePie, who reached 100 million subscribers on his channel last month, took a short break from his Minecraft series to share some reactions to Internet’s most popular comments.

Swedish YouTube king Felix Kjellberg, known to his 101-million-strong audience as PewDiePie, had a hysterical reaction to a story about a Tennessee deliveryman accused of doing some obscene things to his customer’s food in his reactionary video to hilarious comments published on the Reddit website.

PewDiePie is particularly famous for producing game commentary videos, especially while playing Minecraft, but he also takes some days each week to publish some reaction content videos, like his “Last Week I Asked You” series.

This time PewDiePie resorted to reading remarks on the  Cursed Comments section of Reddit - which focuses on dark responses from people on social media - this time it featured a story about a delivery guy from Tennessee who liked to “dip his testicles in customer’s salsa” before delivering it to the hungry saps. The post was commented on by American stand-up comedian Zack Fox who suggested that you should be “a mega hoe if you can taste a hint of a ballsack in some Mexican food”.

The remark provoked a hysterical reaction from the Swedish YouTuber who could not help but point out that Fox was right to some extent.

“To be fair, yes. That is impressive!” PewDiePie stated while continuing laughing.

The Swede also tried to reenact the incident in the video, by pretending to pick up on a nasty flavour while eating salsa.

“Did someone dip their balls in this? Karen, come try this salsa!” he exclaimed, acting like he was trying out some Mexican food.

The video became widely popular among members of his audience and reached almost 4 million views in just 17 hours.

On 25 August PewDiePie reached 100 million subscribers on his channel, proving his status as the most prominent individual content creator on YouTube.