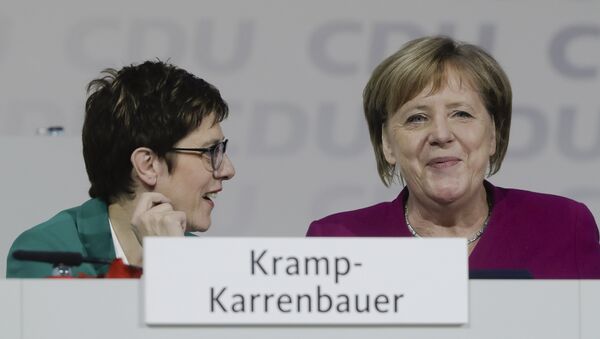 Leader of the Christian Democratic Union Annegret Kramp-Karrenbauer, considered a hopeful to become the next chancellor, was to fly with former CDU chair Angela Merkel to New York last week, but was reportedly removed from the chancellor’s jet. This prompted speculations that something was off between the two politicians.

German Defence Minister Annegret Kramp-Karrenbauer, who succeeded Angela Merkel as the CDU leader last year, has vehemently denied rumours about a spat with the long-time chancellor over a plane reshuffle ahead of a flight to the US.

"To be absolutely clear, there is no rift between Angela Merkel and me", Kramp-Karrenbauer told the German outlet Bild am Sonntag, commenting on her reported removal from the jet that she and her staffers were supposed to share with Merkel and her entourage on the trip across the Atlantic.

She lambasted the speculation that was prompted by the reports as “absolutely baffling". She explained that she was travelling to the US to meet her counterpart in Washington for the first time. According to her, they were to discuss several significant issues, including Afghanistan, tensions in the Strait of Hormuz, and NATO financing.

"The joint trip, which was proposed by my ministry, did not materialise. Fortunately, we found an alternative (plan). So for me, that's the end of it", she stated, saying that she was not offended that her entourage was removed.

AKK, as the 57-year-old politician is dubbed in the German media, was to share a trans-Atlantic German Air Force jet with Angela Merkel, flying to New York to attend the United Nations Climate Summit and then the UN General Assembly, but was offloaded along with her delegation at short notice and had to take another air force plane. As the German outlet Deutsche Welle reports, her outbound flight, booked on a commercial plane, was also rearranged at the request of the Chancellery, her ministry stated last week.

Being controversial from the environmental point of view amid the ongoing climate strikes and the German government’s pledge to tackle environmental issues, the decision to use two jets became another blow to the minister.

Although Kramp-Karrenbauer, thought to be one of Merkel’s closest allies and even dubbed mini-Merkel by the media, has been named among the favourites to assume the office of chancellor in in 2021 when Merkel is expected to leave the post, she has lost support among CDU voters, polls suggest. Her credibility, therefore, has been questioned by some political commentators after she agreed to become defence minister, despite her earlier promises not to take a ministerial post.