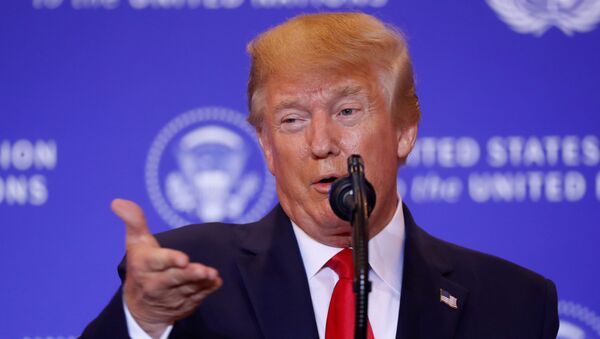 © REUTERS / Jonathan Ernst
Subscribe
The Oscar winner and the father of stunning Hollywood star and activist Angelina Jolie has already come under fire for supporting US President Donald Trump. Despite the backlash over his previous pro-Trump statements, he has stood up for POTUS amid the impeachment inquiry.

Hollywood veteran and vocal Trump supporter Jon Voight has once again prompted a Twitter storm putting a strong word for the US president embroiled in a political scandal after a US government whistleblower claimed he earlier pressured Ukraine's president to look into the business affairs of former US Vice President Joe Biden. Voight has taken to post a 2-minute video address on Twitter, calling the recent event "war against truths" and "a war against the highest noble man who has defended our country and made us safe and great again."

"Let me stand with our president. Let us all stand with our President Trump in a time of such evil words trying for impeachment. This is a crime that the left are trying to force. This is a disgrace by such ignorant followers that have no truth of what truly has been brought back to our country," he said in the clip.

In particular, the Coming Home star has lambasted "the radical left" calling them "destructive" and their codes "corrupt with lies, deceits and anger."

"And we ask why: we ask how could a human being have such anger toward the greatness of our country's glory? I'll tell you why. Because for so long their anger has been growing and with such deep pain, with no open heart for loving and seeing the truth," he said, saying that under Trump the US achieved the greatness that the radical left "want to destroy."

He accused them of wishing to run civilization "like a corrupt ring" and said that they are afraid to lose power.

"I say stand now with Trump. Let truth prevail. And may God show all the truth, that we are truly a nation stronger because of our president," he called on his viewers.

​The message of support for Trump, that has amassed almost 30,000 re-Tweets and thousands of likes, has left netizens split.

Some netizens thanked Voight for speaking out.

Thank you Jon. I love you so much ❤️🇺🇸🙏🏼

Truth! What is happening to President Trump is very upsetting, it is an attack on him of course but it is also an attack on our entire system of Government and every American who voted for him - "ALL PATRIOTS" should be fighting for Trumps re-election in 2020! #Trump2020 #KAG2020

Thank you Jon! I pray that all Americans will be shown the truth. It’s difficult with all the media on board for the Dems. These are very scary times.

Mr. Voight, you just brought tears to my eyes. Thank you for giving me hope on a day I was so tired of fighting the liberal lies. God bless America, our President and citizens like Mr. Voight. Fight to good fight America!

​Others seemed upset with his address and accused Voight of encouraging enmity and violence.

This Jon Voight defending Trump is chilling - it truly seems like he's urging Trump supporters to rise and up and commit acts of violence against the "evil" left https://t.co/ZQtQJ2BGK8

​Some said the actor was a victim of political games.

#JonVoight declares war against the left for trying to #impeach "this highest noble man" Donald Trump.

This is reality through a Trumpian looking glass. Millions of Americans believe it. And crooks like #Trump, #Barr, #Miller, #Pence, and #McConnell prey on them. https://t.co/K30upYsq6C

​Another called on Angelina Jolie to influence her father.