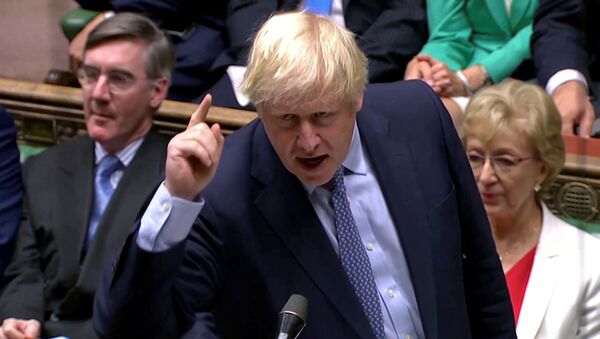 © REUTERS / Parliament TV
Subscribe
After his controversial suspension of parliament, which the UK Supreme Court ruled was in fact illegal, Mr Johnson is having to fight for his political life against a raft of opposition MPs who want to see him removed from power.

The Scottish National Party (SNP) have suggested that UK Prime Minister Boris Johnson could, in the coming days, face a no-confidence vote in his leadership in an effort to remove him from power and shepherd in a Jeremy Corbyn-led ‘caretaker’ government.

The SNP’s plan is part of a broader effort among the opposition parties to prevent a no-deal Brexit, with the party’s trade spokesperson, Stewart Hosie, declaring in an interview with BBC radio 4 that faith in Boris Johnson to “obey the law” has been lost.

On the heels of talks between opposition party leaders at Westminster late this week, Mr Hosie said that a no confidence motion appeared to be the only path left to ensuring that Boris Johnson does not push a no-deal Brexit through parliament on the deadline of October 31.

“We have to do that [implement a no-confidence vote] because there is now no-confidence that the prime minister will obey the law and seek the extension that parliament voted for only a few weeks ago,” Mr Hosie told the BBC Radio 4’s Today programme.

“If we are serious about the extensions, that is the only game in town. It does it appear they [Labour] want the extension, and if the only way to do that is a no-confidence vote, an interim administration for a very short term, simply to get that Article 50 extension, and then to call an election it would be hard to see them reject that offer,” Mr Hosie added.

Hosie elaborated that the overarching aim of all opposition parties and individuals must be to forestall a no-deal Brexit, and that on this issue there needs to be complete unity. However, the main obstacle in the road is Liberal Democrat leader Jo Swinson, who has consistently ruled out the possibility of her party throwing their support behind a Jeremy Corbyn-led caretaker government, that would seek to ensure the Brexit deadline is extended beyond October 31 in order to rule out a no-deal Brexit.

“If another name came forward that was acceptable to everybody – a Ken Clarke or Dominic Grieve-type figure – then self-evidently that would be a good thing to do. But it is also self-evidently the case that the second-largest party [Labour] should have the first chance to form that administration,” Mr Hosie told the BBC.

“If Jo Swinson and the Lib Dems are actually serious about stopping Brexit then they need to stop playing political games [and] get on board with everybody else,” he added.

There were those, however, who appear to be somewhat uncomfortable about the idea of Jeremy Corbyn becoming prime minister.

​The news comes as the SNP’s leader, Scotland’s first minister Nicola Sturgeon, has said that she is open to the possibility of backing Jeremy Corbyn as an interim leader in order to request an extension to Article 50 from Brussels, followed by a general election.

So far, Labour’s position has been that it will only support a general election once it has guarantees that a no-deal exit from the EU on October 31 will not happen.

Moreover, on Friday, Miss Sturgeon responded positively to a Tweet calling for a Jeremy Corbyn-led temporary government to secure an Article 50 extension.