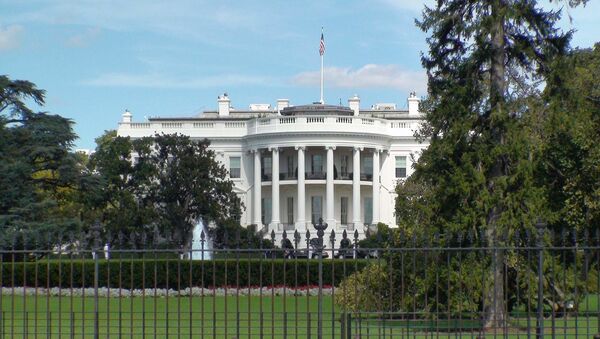 Tim Korso
All materialsWrite to the author
The complaint about potential abuse of power by Trump has fuelled impeachment efforts that have long been pushed by Democrats in the US Congress. POTUS himself has dismissed the allegations against him and accused the Dems of trying to destroy the Republican Party, thereby endangering the whole country.

The anonymous whistleblower who filed a complaint against Donald Trump on 12 August is a CIA officer detailed to the White House and therefore first expressed concern to the intelligence agency’s General Counsel Courtney Simmons Elwood without identifying themselves, The New York Times reported, citing anonymous sources.

The officer was reportedly worried about how Trump had conducted a telephone talk with Ukrainian President Volodymyr Zelensky on 25 July, although the whistleblower only indirectly knew about the conversation’s content. Elwood, following established procedures, addressed a number of officials regarding the officer's concerns, including John A. Eisenberg, a deputy White House counsel, meaning that the administration could have been aware of the matter a mere week after the call. 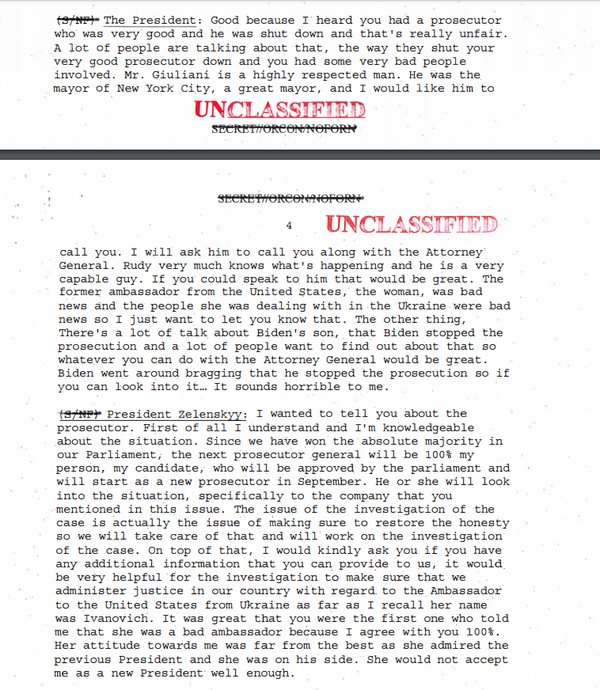 The consultations between officials on whether the president had indeed crossed the line in talks with Zelensky stalled and, according to the NYT’s sources, the CIA officer started fearing that their concerns were not being taken seriously. At that point, the officer decided to file an official whistleblower complaint with CIA Inspector General Michael Atkinson in a bid to secure "special legal protections", the newspaper said.

The whistleblower complaint, an edited version of which was published only recently, served as fuel for Democrats' impeachment efforts against the president. POTUS dismissed the accusations, saying that his talk with Zelensky was "pitch perfect".

In the complaint, the whistleblower admits that he was not a direct witness of the talks between the two presidents, but claims to have heard "credible" accounts of the event from half a dozen US officials. The author of the complaint alleges that Trump could have abused his power during the talk by "pressuring" his Ukrainian counterpart to initiate an investigation into one of his main political rivals in the 2020 election – Joe Biden. 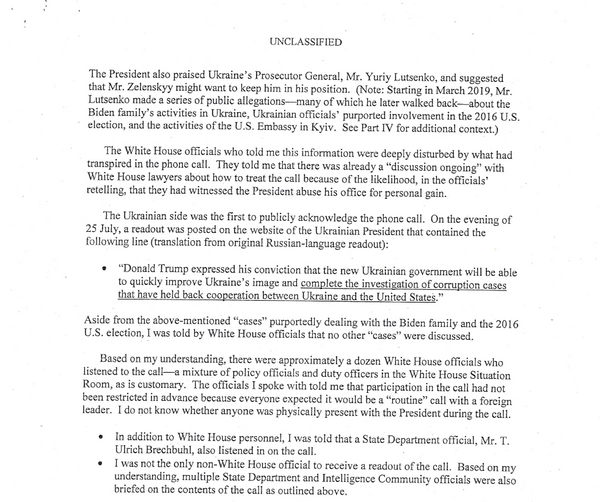 Screenshot of the whistleblower's complaint on Trump-Zelensky call
© Photo

The whistleblower claims that Trump used most of the conversation to "advance his personal interests". At the same time, the complainant does not mention POTUS using any leverage to "pressure" Zelensky, contradicting earlier Democratic allegations of Trump freezing financial help to Ukraine for that specific purpose.

The release of the complaint was preceded by the publication of a transcript of the conversation between the presidents on 25 July. Trump indeed mentions Biden once in the talk and asked Zelensky to look into the claims of the former vice president lobbying the previous Ukrainian presidential administration into dropping a criminal case against his son.

Biden's son, Hunter was under investigation by Ukrainian law enforcement as a board member of the natural gas firm Burisma. The probe was dropped after the prosecutor behind it, Viktor Shokin, was sacked. Ukrainian Prosecutor General Yuriy Lutsenko later alleged that Joe Biden had used his influence as US Vice President to pressure then President Petro Poroshenko to sack Shokin in order to save his son.