US Envoy to Ukraine Kurt Volker Reportedly Resigns From Post 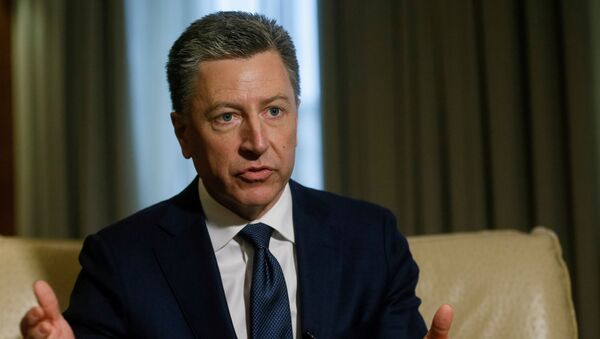 Kurt Volker, US special envoy to Ukraine, reportedly resigned from his post Friday after being named in a whistleblower complaint related to a July phone call between US President Donald Trump and Ukrainian President Volodymyr Zelensky.

Volker's resignation was broken by the State Press, the student-run newspaper at Arizona State University. Volker acts as the executive director of the McCain Institute, which is a think tank associated with the university.

​Although an ASU official did confirm Volker's resignation Friday, they did not specify whether or not the US envoy would continue working with the university's institute. The ASU official also confirmed that Volker met with US Secretary of State Mike Pompeo Friday to announce his resignation.

According to Reuters, Democrats in the US House of Representatives are seeking testimony from Volker regarding his alleged actions.

US House Speaker Nancy Pelosi announced a formal impeachment inquiry against Trump earlier this week after Trump and Zelensky's July 25 call was revealed to be at the center of an August whistleblower report that the Trump administration fought to keep from Congress.

Pelosi has accused Trump of seeking Ukraine's help to investigate the case against US 2020 presidential candidate and former Vice President Joe Biden, who publicly admitted in 2016 to having threatened Ukrainian authorities with withholding $1 billion in US loan guarantees if Kiev did not fire the prosecutor who had been investigating a Ukrainian gas company connected to Biden's son.

House Democrats are also claiming that Trump threatened to withhold military aid to Ukraine unless Zelensky looked into the Biden case.

Pelosi's announcement came on the heels of Trump stating that he would allow for the release of the transcripts of the phone conversation between Zelensky and himself.

This latest development comes amid news that the US House Intelligence Committee will return from recess for a closed hearing on 4 October. The panel is expected to hear from Michael Atkinson, the intelligence community inspector general who handled the whistleblower complaint.