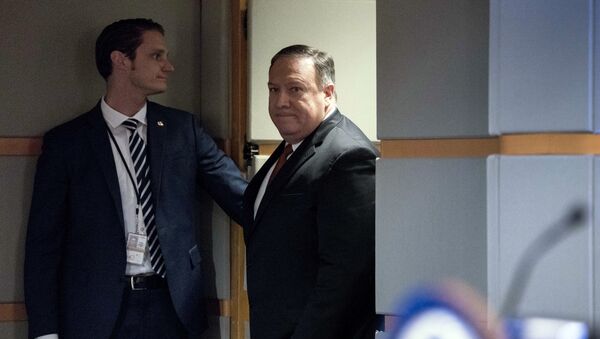 © AP Photo / Andrew Harnik
Subscribe
International
India
Africa
Three Democratic-led US House of Representatives committees on Friday issued subpoenas to US Secretary of State Mike Pompeo, seeking to compel him to hand over documents with regard to his contact with Ukrainian authorities.

According to the document, House Foreign Affairs, Intelligence and Oversight Committees "are investigating the extent to which President Trump jeopardized national security by pressing Ukraine to interfere" with the 2020 presidential election.

The committee subpoenas warn that any "failure or refusal to comply with the subpoena shall constitute evidence of obstruction of the House's impeachment inquiry".

"Pursuant to the House of Representatives' impeachment inquiry, we are hereby transmitting a subpoena that compels you to produce the documents set forth in accompanying schedule October 4, 2019", the three committee chairs wrote in letters to Pompeo. "The subpoenaed documents shall be part of the impeachment inquiry and shared among the Committees".

The committees have scheduled depositions for five State Department officials over the next two weeks, including former US Envoy to Ukraine Marie Yovanovitch, Envoy Kurt Volker - the US Special Representative for Ukraine, and Envoy Gordon Sondland, the US Envoy to the European Union.

Last week, a whistleblower filed an official complaint with the inspector general of national intelligence alleging that US President Donald Trump attempted to solicit a foreign campaign contribution.

After two days, the US House of Representatives announced its intention to move forward with an impeachment inquiry against the US president.

Trump allowed the release of an unredacted transcript of his conversation with Ukrainian President Volodymyr Zelensky.

The transcript revealed that Trump asked Zelensky to work with his personal lawyer and the US attorney general to "look into" the case of Joe Biden, who admitted publicly in 2016 to having threatened Ukraine authorities with withholding $1 billion in US loan guarantees if Kiev did not fire the prosecutor who had been investigating a Ukrainian gas company linked to his son, Hunter.

The transcript did not, however, contain signs that the US president overtly threatened to withhold financial assistance to Ukraine if Zelensky did not do him this favor, but Democrats are accusing Trump of using his power to request evidence against a potential competitor in the next presidential race.