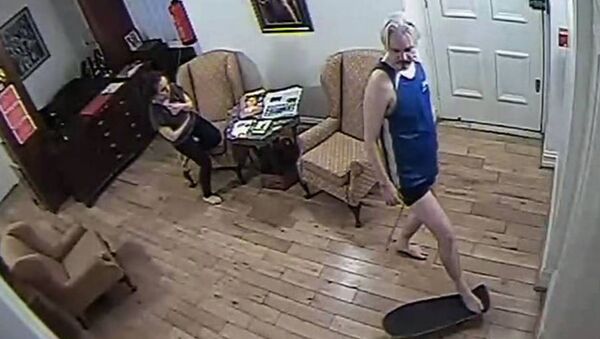 © Photo : Screenshot
Subscribe
In July, a Spanish newspaper revealed that Assange, who is currently facing 18 charges and extradition to the US for disclosing national secrets, was watched on a round-the-clock basis by a Spanish private security firm while being sheltered in the Ecuadorian Embassy in London.

Spain’s High Court is currently investigating the activities of Spanish private security company Undercover Global S. L., which has been hired by the government of Ecuador to protect its Embassy in London but was also spying on Julian Assange, who took refuge there for seven years on behalf of the US intelligence services, El Pais reported.

According to the documents, statements and footage obtained by El Pais, which first reported about the firm’s spying activities in July. The company installed new cameras at the Embassy at the beginning of December 2017; its owner David Morales ordered its technicians to install an external streaming access point so all the recordings could be accessed by the United States. Dozens of meetings between Assange, his visitors and lawyers have thus been recorded round-the-clock from December 2017 to March 2018 and handed to US intelligence services.

The investigation against Morales and his company was ordered by judge José de la Mata several weeks after the outlet firstly published the footage and audio alleging that the company carried out the spying activities against the founder of WikiLeaks. It followed a criminal complaint filed by Assange himself, in which he accused Undercover Global S. L. and its owner for violating his privacy and the secrecy of client-attorney privilege.

The outlet argues that Morales, who is a former member of the military, has repeatedly stated both verbally and in writing that he has worked for the Americans despite being hired by the Ecuadorian government and intelligence services on behalf of then-Ecuadorian President Rafael Correa, who was the one who granted Australia-born Assange Ecuadorian nationality in 2012 in order to hide him in country’s embassy in London.

The spying practices were constantly carried by the security employees at the embassy against Assange according to reports, which included monitoring Assange’s activity, mood, conversations and writing up a confidential report each day that was sent to Morales and then allegedly handed to US intelligence.

One case of surveillance particularly sticks out, when the owner of UC Global S. L. reportedly ordered a meeting between the head of the Ecuadorian secret service, Rommy Vallejo, and Assange in December 2017 while they were planning the exit of WikiLeaks founder to another country. Although the professed operation was eventually rejected by Assange, who saw it as “a defeat”, the audio and video recordings from the meeting were allegedly later handed to the US intelligence services, that eventually put out an international arrest warrant for Assange.

It has also been reported that despite Assange being so paranoid about the surveillance carried out against him and conducted some of his meetings in the women’s bathroom, including ones with his lawyer Aitor Martínez, Morales ordered to have microphones installed in the embassy’s fire extinguishers there as well.

The espionage activities against the WikiLeaks founder have reportedly increased under the government of the incumbent Ecuadorian leader, who assumed office in May 2017 and handed Assange over to British authorities in April of this year.

In July the owner of UC Global S. L. declined to respond to this newspaper about whether his company had spied on Assange.

“All the information is confidential and it belongs to the government of Ecuador. We simply did a job. I cannot comment on anything that we did there, I can’t provide any details,” Morales said in a telephone conversation.

In 2010, the Australian editor and founder of the whistleblowing website WikiLeaks obtained and published a series of US leaks provided by former US Army intelligence analyst Chelsea Manning, with the US government launching a criminal investigation against WikiLeaks and Assange on the basis of "unlawfully obtaining and disclosing classified documents related to the national defence".

Assange had been sheltered in the Ecuadorian Embassy in London since 2012 until April 2019, when he was handed over to British authorities by Ecuador.