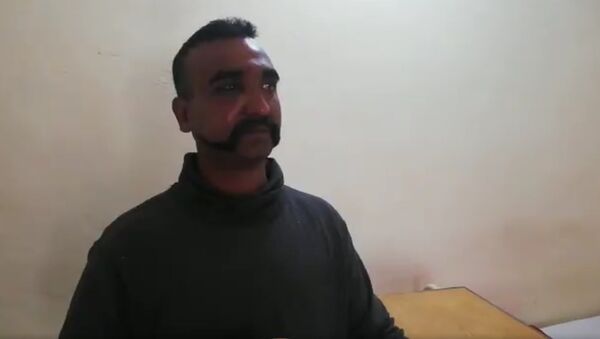 New Delhi (Sputnik): Pakistani Army spokesperson appears to have stirred a hornet’s nest by mocking Indian Wing Commander Abhinandan Varthaman, whose aircraft was downed in the February dogfight between the two countries, in a video.

The video has outraged many Indian twitterati as it appears to be mocking the Indian dogfight hero, Wing Commander Abhinandan Varthaman, who was briefly detained by Pakistani Army during the February dogfight. Wing Commander Varthaman was seen in a video, while a Pakistan Army captive, praising Pakistan's "fantastic tea".

Welcoming the Sri Lankan team, Ghafoor captioned the video clip as, "Welcome Team Sri Lanka. For sure you are as good as your tea. Pakistani tea is ‘fantastic’ too,” after a cricket tour of the Sri Lankan team to Pakistan was jeopardised due to security reasons and the top 10 cricketers from the squad had pulled out from the tour.

The video of Varthaman had gone viral on social media, especially in Pakistan.

The Tea is fantastic ..😂😂👇 pic.twitter.com/9rlhfYKCe1

Trolling at its highest 😂😂

I am sure this tea too is from our Kashmir only, hard to believe Pakistan can offer anything of its own to anyone, except terrorism!!@OfficialSLC, All the best!!, We pray for you, I hope you won’t encounter historical nightmares in Pakistan!!

Many Indian Twitter users have hit back, asking if it isthe  Sri Lankan team's B group players as almost all of the top 10 players had backed out of the Pakistan tour, citing security concerns.

Let's put it this way. 'Welcome Sri Lanka B team for a cricket series which your main team has rejected to participate due to grave issues of terrorism in Pakistan.' Now this sounds fantastic. 😁

Yeah with a pistol pointing at you , even 🇵🇰 will say TEA IS FANTASTIC 🤣🤣🤣

Wing Commander Abhinandan was detained by Pakistani forces after his Mig21 was shot down in late February by the Pakistani Air Force over the Line of Control (LoC). He was released a few days later.

A 14 February Pulwama terror attack allegedly carried out by Pakistan-based Jaish-e-Mohammad (JeM) suicide bombers in which 40 Indian troopers were killed in Pulwama, in Kashmir. India responded with airstrikes against purported JeM terror camps in Balakot in Pakistan on 26 February, and was soon targeted by a Pakistani air raid which culminated in a dogfight.