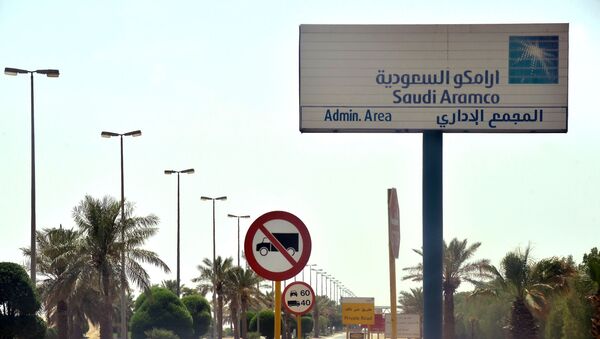 © AFP 2021 / FAYEZ NURELDINE
Subscribe
Iran vigorously denies being behind the drone attacks that caused Saudi Arabia, one of the world’s biggest oil producers, to suspend over half of its overall daily output, with Yemen's armed Houthi rebels claiming responsibility.

Israeli Foreign Minister Israel Katz slammed Iran during his address at the United Nations on Thursday, branding the Islamic Republic the world’s biggest sponsor of terrorism and urging the international community to join US-imposed sanctions against the country.

“And to the Iranian leadership I say in their own language: Joojeh’ra akhare paiiz mishmarand. You don’t count the birds till the end of the fall”, he added. “It isn’t over till it’s over”, Katz remarked, implying that Iran’s rivals are those that will laugh last.

Briefly speaking in front of the UN General Assembly, Katz also suggested that the Palestinians resume direct talks with the Israel, also stressing their desire to normalise relations with Arab states in the Gulf, while refraining from endorsing a two-state solution to the standoff in the West Bank.

He especially addressed a recent attack on Saudi oil facilities, claiming it was conducted with Iranian missiles and had the clear goal of destabilising world oil supplies.

“This terror attack against Saudi Arabia was done on the direct orders of Iranian [Supreme] Leader Ali Khamenei”, Katz claimed. “Iran is the biggest terror state, and the biggest sponsor of terror in the world”.

Separately, Katz, who represented Israel at the UN’s New York gathering instead of Benjamin Netanyahu, who is currently sorting out a coalition-related domestic political crisis, called on the UN to blacklist Hezbollah, a Shiite group operating in Lebanon, and Iran’s Revolutionary Guards as terrorist structures.

“They promote terror in the Middle East, Europe, Latin America, and all over the world. And the world must stop them”, he said, going on to laud the US-imposed crippling limitations put on the Islamic Republic.

Despite the incident having been claimed by the Yemen-based Houthi movement, multiple accusations came from the US, Israel, France, the UK, and Germany. Iran, meanwhile, denies any involvement in the 14 September drone attack on the state-owned Aramco oil processing facilities in the kingdom’s eastern part.

Last week, on 20 September, Washington slapped a fresh round of economic sanctions on Iran over the latter’s alleged attacks on Saudi Aramco oil fields, with US Treasury Secretary Steven Mnuchin arguing that the move is aimed at cutting off “all sources of funds to Iran".

Iranian President Hassan Rouhani indirectly touched upon the issue during his Wednesday’s speech at the UN, noting that the only way Tehran would sit down at the negotiating table with Washington would be if it returns to the JCPOA, which it pulled out from in May 2018, and halts its sanctions campaign.

The P5+1 Joint Comprehensive Plan of Action (JCPOA), which was ditched unilaterally by the US, stipulates that Iran is free of economic restrictions in exchange for limits to its uranium enrichment, which Washington feared was being used not only for nuclear power for “civilian” use.