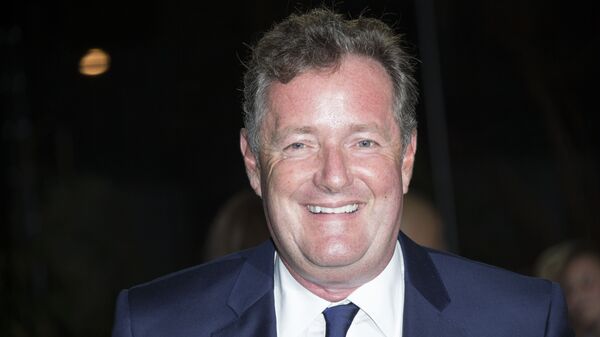 © AP Photo / Joel Ryan
Subscribe
Shortly after Boris Johnson’s fiery speech in Parliament, Labour MPs took a swipe at the prime minister over what they deemed to be an unacceptable mention of Jo Cox, who was murdered ahead of the national referendum on Britain’s EU exit in 2016.

Good Morning Britain host Piers Morgan has called out a Labour MP who told him to “go f***” himself. The furious spat with the anchor man took place on the same day that Labour criticised Prime Minister Boris Johnson for using inflammatory language while in Parliament.

“British politicians now using their murdered former colleague Jo Cox to wage their viciously tribal Brexit war. Parliament has reached a new low, on all sides. Disgraceful”, Morgan tweeted first, with MP for Bermondsey and Old Southwark Neil Coyle hitting back with his own tweet:

“You're a sad, sick little man. For you to stoop this low is shocking. Grim.”

The answer ushered in a whole spat, with Morgan continuing, flipping over at parliamentarians:

“Actually, you & your fellow MPs are the sad, sick, low, grim ones. Parliament has become an absolute disgrace, so don’t you dare try to lecture others on behaviour”.

Coyle didn’t stop at that either, fuming in a lengthy foul-mouthed rant:

“It's early doors Piers but I say this hand on heart: go f*** yourself. You're a waste of space, air and skin”, Coyle posted, going on to bring up late MP Jo Cox, who was murdered ahead of the Brexit referendum in 2016:

“Trying to use Jo against us whilst encouraging the fascists is shocking even for a scrote like you. You make me sick”, he thundered, with Piers going for a less wordy reply, quote-tweeting him:

The strong-worded exchange came a day after Boris Johnson was blasted by MPs for telling Parliament that the best way to pay tribute to Jo Cox is to “get Brexit done”, which he vowed to complete by the Halloween deadline of 31 October, arguing in his signature manner that he would “rather be dead in a ditch” than agree to a Brexit prolongation.

Amid the fierce Brexit deal debate and ongoing negotiations both at home and in the EU, the UK’s Supreme Court ruled that the prime minister’s decision to prorogue Parliament was unlawful, despite Johnson’s argument that the five-week suspension was tied to the Queen’s upcoming speech.

However, opponents regarded Johnson’s move as undemocratic and designed to silence those who oppose a no-deal Brexit – an option Johnson is known to keep in store in the event that an exit agreement is not agreed upon by the scheduled deadline.