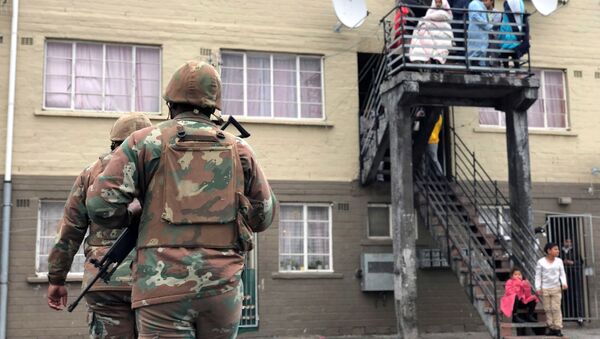 Violent protests have flared up in Cape Town, South Africa over the last few days amid a potential backlash against a crackdown by authorities on minibus taxi drivers, adding to the chaotic atmosphere in the city, which has been experiencing an upsurge of gang activity in the last few months.

The South African Army has been ordered to remain in Cape Town for another three months, having been deployed since July alongside police units in order to quell relentless gang violence, Al Jazeera reported.

Troops have been patrolling the streets of Cape Town for over two months, especially in the densely packed townships area known as the Cape Flats on the outskirts of the city, which is notorious for drug dealing and gang violence, often associated with poverty and unemployment.

According to government statistics, the number of murders directly linked to gang violence in the area has doubled since last year, amounting to 90 cases as of September 2019, but DW News argued that around 2,000 people have been murdered since January.

In an interview with Al Jazeera, some locals noted that the deployment of the army has not been very effective so far, as soldiers have been spotted in the violence-afflicted neighbourhood only a few times per week.

Recently, the city has also been experiencing another wave of violence, but this time associated with protests against a crackdown by traffic authorities on errant minibus taxi drivers, causing several roads to be closed, as traffic and metro police have been deployed to combat the unrest.

I don't get it. The police station is literally down the road yet this has been allowed to escalate. Get a bunch of chicks together begging not to be raped and murdered and they call people out of retirement to operate the cannons. #Protest #Milnerton #Koeberg pic.twitter.com/dIwwb85YFV

“Due to violent protesting in Du Noon, Potsdam Road is closed in both directions between Malibongwe Road and Killarney Road. This is due to vehicles that are being stoned”, said Cape Town traffic services spokesperson Richard Coleman.

In the meantime, the South African farming community has seen at least 60 murders and 200 attacks committed across the country since the beginning of 2019, with the AfriForum group arguing that gang attacks on white South African farmers increased by 25 percent in 2018 and have often seen the use of torture.