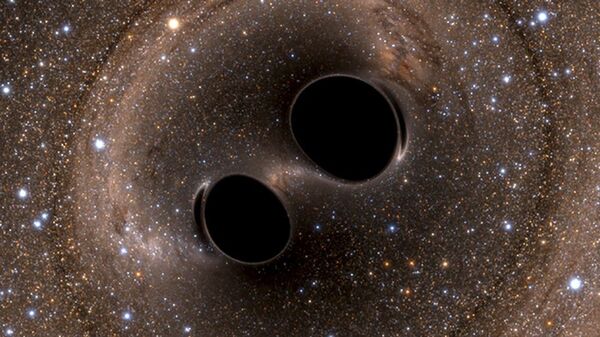 © REUTERS / The SXS Project
Subscribe
Astronomers, using numerous space telescopes, including NASA's Chandra X-ray Observatory, have spotted triplet black holes in a rarely-seen titanic collision of three galaxies located a billion light-years from our planet. According to scientists, the newly discovered space giant could shed light on how collapsars grow.

The strongest evidence yet of a triplet galaxy system with three supermassive black holes on a collision course after a giant space merger has been discovered in a new study. During the research, published in the respected Astrophysical Journal, data from several NASA ground and space telescopes, including the Chandra X-ray Observatory, have been combined to uncover this never-seen-before giant, known as SDSS J084905.51+111447.2 and located a billion light-years from our planet.

"We were only looking for pairs of black holes at the time, and yet, through our selection technique, we stumbled upon this amazing system. This is the strongest evidence yet found for such a triple system of actively feeding supermassive black holes", one of the authors of the paper, Ryan Pfeifle from George Mason University in Fairfax, said in a press release.

The finding is said to be very rare, as triplet black holes are likely to be clouded in gas and dust, which makes it difficult for telescopes to detect them as these obstacles block light. However, infrared and X-ray devices have helped bypass this obstacle. At the same time, more information about such systems could help researchers understand how black holes grow.

"Dual and triple black holes are exceedingly rare but such systems are actually a natural consequence of galaxy mergers, which we think is how galaxies grow and evolve”, co-author of the study Shobita Satyapal said.

The scientists suggest that it is the third black hole that could have brought the space giants together, becoming an extra source of pull. According to the release, the third black hole might resolve a theoretical conundrum dubbed the "final parsec problem", which theorises that two collapsars could approach to within a few light-years, but need additional force to bring them together.

The researchers used computer simulations to uncover that a third space giant interacts with 16% of black hole pairs in merging galaxies before they collide. The collision is thought to emit gravitational waves that are basically ripples through space-time and are hard to trace, except by radio observations of pulsars or future space observatories.