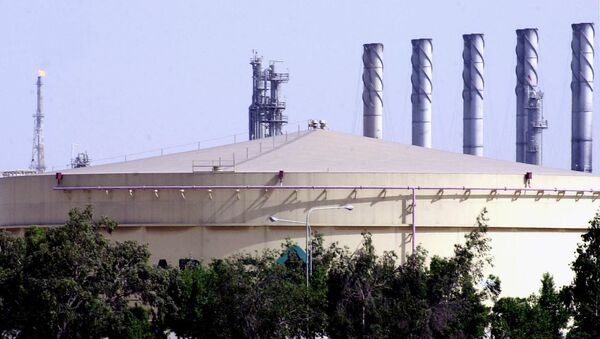 © AP Photo / HASAN JAMALI
Subscribe
Assistant US Secretary of State for Near Eastern Affairs, David Schenker, said Thursday that US officials are discussing with the European Union the possibility of participating in a maritime military alliance in the Gulf area, media reported.

Schenker noted that a team from the United States, the EU, Saudi Arabia, and the United Nations will deliver a special report on recent attacks on Saudi Arabian oil facilities, according to the Al Arabiya broadcaster.

While Yemen's armed Houthi opposition political faction claimed the responsibility for the attacks against Saudi Arabia, the United States put the blame on Iran, as have France, Germany, and the United Kingdom. Iran has denied involvement.

Iranian President Hassan Rouhani said that Yemen's Houthis humiliated Washington, as they were able to hit targets in Saudi Arabia due primarily to the ineffectiveness of US missile defence systems sold to the Kingdom.

In light of the recent attacks on the kingdom, Washington is deploying a battery of Patriot missiles, four sentinel radar systems, and about 200 American support personnel to Saudi Arabia, according to Pentagon Chief spokesperson Jonathan Hoffman.

Saudi Arabia and its allies, including Yemen's current government in exile, have been conducting a war against the Houthi opposition faction since 2015. An estimated 12,000 civilians have been killed and millions have been displaced in Yemen - the region's poorest nation - in what the United Nations is currently describing as the world's worst humanitarian crisis.

000000
Popular comments
A corrupt report similar to Dutch report on the downed Malaysian airliner in Ukraine...
netman
26 September 2019, 22:30 GMT6
000000
How could 5 years of war cause a dead count of just 12000 when a UN report says: …….. „ By the end of 2019, fighting in Yemen will have claimed about 102,000 lives.“ ……… „A UN-commissioned report by University of Denver also revealed that more Yemenis were dying of hunger, disease and the lack of health clinics and other infrastructure than from fighting. About 131,000 Yemenis will have died from these side effects of the conflict between the beginning in 2015 and the end of 2019“ …….. „The combined death toll from fighting and disease is 233,000, or 0.8 percent of Yemen's 30 million-strong population.“ ………………………………. Search engine: ImpactOfWarOnDevelopmentInYemen.pdf