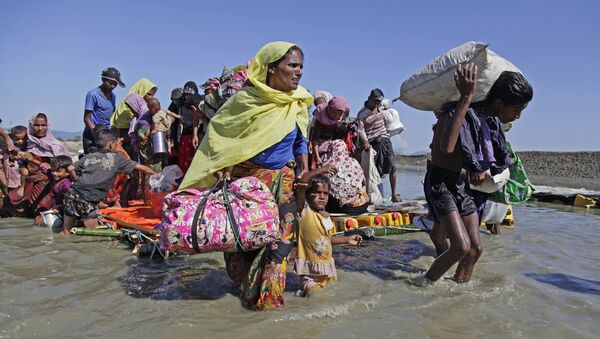 "We will soon install barbed wire fences around the camps as per the directive of the prime minister to maintain law and order in the camps and ensure safety and security," Bangladesh-based The Daily Star quoted Minister Khan saying.

He was addressing the press after meeting the US ambassador to Bangladesh, Earl R. Miller, and a European Union delegation.

Since August 2017, up to 1.1 million Rohingyas have fled Myanmar’s North Rakhine state and sought refuge in neighbouring Bangladesh.

Last month, about 200,000 Rohingya refugees marked the second anniversary of the Myanmar military’s brutal crackdown on their culture. It led a worried Bangladesh government to immediately impose a communication lockdown, blocking mobile and internet services.

Authorities in Bangladesh’s capital city of Dhaka are concerned about what they have described as a rise in crime within and outside the camps.

The potential of foreign terrorists influencing Rohingyas and their involvement in drug smuggling operations between Myanmar and Bangladesh is also a cause for worry, according to Dhaka.

Since early 2018, the governments of Bangladesh and Myanmar have been engaged in talks to define an acceptable refugee repatriation scheme. In the last ten months, there have been two failed attempts to repatriate refugees.

The Bangladesh government said most of these refugees are reluctant to return to Myanmar as there is no guarantee of safety or livelihood. The other issue is that the current Myanmar regime does not want these refugees to return.

Bangladesh has appealed to the international community to step in and treat the refugees’ return to Myanmar as a priority, which many observers and analysts say is impossible in the near term, as some countries are keen to nurse their economic and political leverage over Myanmar.