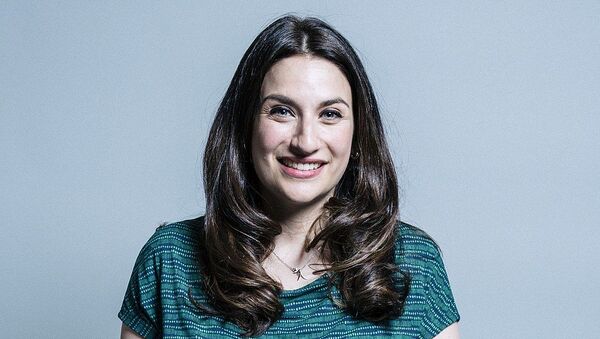 CC BY-SA 3.0 / Chris McAndrew / Official portrait of Luciana Berger
Subscribe
Finchley & Golders Green is a constituency in north London which has the highest concentration of Jewish voters in Britain. The Labour Party is expected to be hit hard at the general election after accusations of anti-Semitism.

Luciana Berger, an MP who quit the Labour Party after it was accused of failing to tackle anti-Semitism, has decided to run as a Liberal Democrat candidate in Finchley & Golders Green, a constituency where one in five voters are Jewish.

She tweeted a copy of her letter to her constituents in Liverpool Wavertree in which she said: “In Parliament I will persist in standing up to Boris Johnson and his government who are intent on taking us to the No Deal Brexit precipice - with all the serious consequences that would bring for people’s jobs and livelihoods on Merseyside and around the country.”

Ahead of the next General Election, a letter from me to constituents about my future - pic.twitter.com/S1UGOoBHnA

​Berger, who is Jewish, was elected as the Labour MP for Liverpool Wavertree in 2010 but quit the party earlier this year, along with Chuka Umunna and several others who accused Jeremy Corbyn of turning a blind eye to anti-Semitism.

She described Labour as "institutionally anti-Semitic" in her resignation speech and said she was shocked by the "volume and toxicity" of abuse from supporters of Mr Corbyn.

Berger, 38, refused to stand down at a by-election but instead switched to Change UK, a small centrist party led by former Tory MP and staunch Remainer Anna Soubry.

In June she quit Change UK after their disastrous performance at the European elections and earlier this month she changed her allegiance again and joined the Liberal Democrats.

I’m delighted with today’s news that @lucianaberger will be standing in a London seat at the general election.

I look forward to helping her become the next MP for Finchley and Golders Green.

This is an exciting time for Liberal Democrats in the capital. pic.twitter.com/V2pVcO6jOi

​On Thursday, 26 September, it was announced she had been selected as the Liberal Democrat parliamentary candidate in Finchley & Golders Green.

At the last election the Tory MP Mike Freer had a majority of only 1,657 over Labour’s Jeremy Newmark, with the Lib Dems trailing badly in third place.

But Berger, who has given up her seat in Liverpool Wavertree, is gambling on Jewish voters deserting Labour in droves because of the anti-Semitism controversy and she also hopes to persuade thousands of Remainers in the affluent constituency to switch from the Tories to the Lib Dems.

The Lib Dem MP will be leaving Liverpool at the next General Election.

We wish @lucianaberger well in the fight for the Finchley & Golders Green seat and hope that she has a long and successful Parliamentary career. pic.twitter.com/BAGmgZFtcX

​Berger is cashing in on complete disarray in the Labour Party in Finchley and Golders Green.

Earlier this month Sara Conway - who had only been selected five months ago - stood down as the Labour parliamentary candidate after there was a backlash about her comments that anti-Semitism had been "weaponised."

In an interview with the Jewish News, Ms Conway had said: "You can’t weaponise without there being a problem but this issue has been weaponised by certain media commentators. I don’t mean necessarily in the community."

I’m delighted with today’s news that @lucianaberger will be standing in a London seat at the general election.

I look forward to helping her become the next MP for Finchley and Golders Green.

This is an exciting time for Liberal Democrats in the capital. pic.twitter.com/V2pVcO6jOi

​The Jewish Chronicle reported that Ms Conway was "devastated" by the reaction to the interview and decided to stand down, after saying she had "used the wrong word by saying weaponised."

Ms Conway said she was "referring to far-right commentators particularly on Twitter who use this issue as a political football to create polarisation and division."

Ms Conway’s resignation leaves Labour with only a few weeks to find a new parliamentary candidate and it looks an uphill task for the party to get second place, let alone beat the Tories in Finchley & Golders Green, a seat which they held as recently as 2005.

The Lib Dems should be ashamed to be the Tory B-team, but instead Richard Kemp is jumping for joy. Tories don't win in Liverpool for a reason and slapping a yellow rosette on them won't change a thing #YellowTories https://t.co/3cV9Xodwhl

​Chuka Umunna, who also joined the Liberal Democrats recently, has quit his Streatham seat and said he will run as a candidate in Cities of London and Westminster, where he will challenge Tory MP Mark Field in a strong Remain constituency.