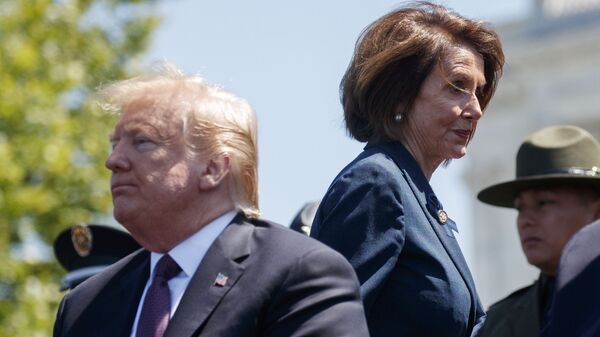 The Democratic Speaker of the US House of Representatives, Nancy Pelosi, announced that the US government will move forward with an impeachment inquiry based on a 25 July phone call in which President Donald Trump asked Ukrainian President Volodymyr Zelensky to look into an investigation tied to former Vice President Joe Biden's son Hunter.

On Monday evening, Pelosi reportedly began writing what could become one of the most significant texts in her career as an American politician regarding the impeachment of US President Donald Trump. She began drafting and mulling the speech - that may well be a dagger into Trump's political career - on a flight from New York to Washington and then left it on the plane, Reuters reported, citing an unnamed source that claimed to be familiar with the matter.

"She wrote the first draft of her speech that she would give Tuesday [...] At least she had organized it in her head", the source said, cited by Reuters.

"The president has tried to make lawlessness a virtue in America and now is exporting it abroad [...] It is not part of his job to use taxpayer money to shake down other countries for the benefit of his campaign", Pelosi said Wednesday in a news release, explaining the move to impeach.

Pelosi’s comments marked the most significant salvo by the House of Representatives to impeach Trump.

On Tuesday, Pelosi detailed her efforts to impeach the US president. "Today I'm announcing the House of Representatives is moving forward with an official impeachment inquiry [...] I'm directing our six committees to proceed with their investigations under that umbrella of an impeachment inquiry. The president must be held accountable, no one is above the law", Pelosi said Tuesday.

The US Department of Justice, meanwhile, released the transcript of Trump's 25 July telephone conversation with Zelensky.

The transcript showed that the US president did ask Zelensky to work with his personal lawyer and the US attorney general to "look into" the case of Joe Biden, who "went around bragging that he stopped the prosecution" into his son’s possible corruption in Ukraine.

The transcript did not contain, however, signs that the US president overtly threatened to withhold financial assistance to Ukraine.

Pelosi alleged that Trump's request to the Ukrainian president to intervene in the US election by probing Biden is a breach of his constitutional responsibilities.

According to Pelosi, the acting director of national intelligence, Joseph Maguire, will decide on Thursday whether to turn over the full text of the complaint by the whistleblower to the House Intelligence Committee, or break the law by withholding it.

Just hours before leaving office in early 2017, the outgoing two-term vice president threatened to withhold aid to Ukraine unless the country fired top prosecutor Viktor Shokin. At the time, Shokin was investigating a Ukrainian company that employed Biden’s son Hunter, US media reported at the time.

After Pelosi’s announcement, Trump, in a serious of tweets, repeated that the investigation of his phone call with the Ukrainian leader is a political "witch hunt" and described it as presidential harassment, admitting that Democrats have not seen the full transcript.