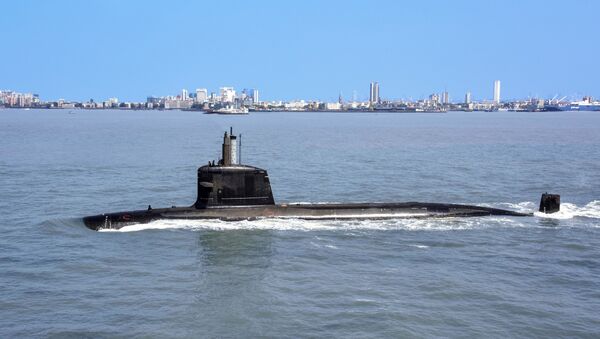 © Photo : Indian Navy
Subscribe
New Delhi (Sputnik): Amid an increased Chinese submarine presence near India's waters, Admiral Karambir Singh said that "the Indian Navy is watching their presence and we have to see how our navy can match China's 'intent', given its limited budget and resources”.

Amid the rising dominance of China's naval strength in the Indian Ocean, India's Navy is set to bring into service its second Scorpene-class submarine, the INS Khanderi, on Saturday in a ceremony which will be attended by Indian Defence Minister Rajnath Singh.

It is the second of six submarines being locally built following a transfer of technology from French firm Naval Group (earlier DCNS).

The submarine, which was scheduled to enter into service in 2013-14, has missed the deadline for induction by more than six years. Besides delays in construction, the Indian Navy has discovered several deficiencies, including the high level of noise that was generated by the engines and propellers of the diesel electric attack submarine during sea trials. The navy warned that the original manufacturer, French Naval Group, about these problems and asked to rectify it at the earliest.

The Indian Navy expects a massive surge in its maritime power since the superior stealth INS Khanderi can launch a crippling attack with torpedoes against an enemy target.

"The state-of-the-art technology utilised for construction of the Scorpene class submarines has ensured superior stealth features such as advanced acoustic silencing techniques, low radiated noise levels, hydro-dynamically optimized shape and the ability to launch a crippling attack on the enemy using precision guided weapons. The stealth of this potent platform is enhanced by the special attention given to various signatures. These stealth features give it an invulnerability, unmatched by most submarines", the Indian Navy stated.

The submarine is capable of firing the French-made Exocet SM39, a sea-skimming, subsonic anti-ship missile, with an approximate operational range of 50-70 km. It is also equipped with six 533-millimeter torpedo tubes for launching anti-ship torpedoes, anti-ship missiles, and sea mines.

Networked with the rest of the fleet using Ku and S-band SATCOM systems, the sub will be armed with heavyweight torpedoes that are still under procurement. For the interim, SUT torpedoes that are in service with India’s Shishumar-class submarines have been integrated into the Scorpene fleet.