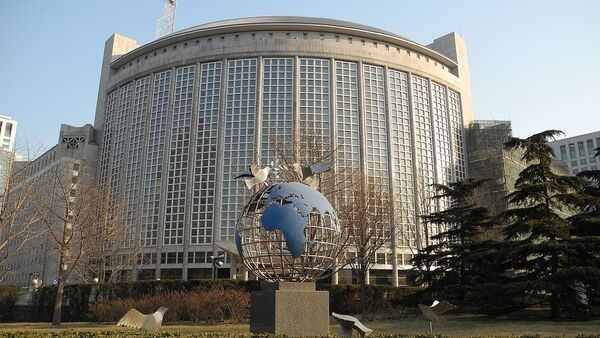 On 25 September, the US imposed restrictive measures against five Chinese nationals and six entities over their alleged role in helping Iran to circumvent US sanctions.

Beijing slammed on Thursday the recent US sanctions introduced against a number of Chinese nationals and entities, calling the move "a gross violation."

"Despite the legitimate rights and interests of all parties, the United States wielded a wanton stick of sanctions, which is a gross violation of the basic norms of international relations," Foreign Ministry spokesman Geng Shuang said at a press briefing.

The recently introduced restrictive measures target China Concord Petroleum Company, along with shipping vessels and companies that had allegedly helped export Iranian petroleum in violation of US sanctions.

This isn't the first time, the US introduces sanctions against the Asian superpower for oil trade with Iran. In July, the US Treasury slapped sanctions on Chinese oil trader Zhuhai Zhengrong Ltd and its CEO Youmin Li after a Bloomberg report accused China of getting around tough US energy sanctions by putting the Iranian imports into bonded storage.

The decision to sanction the nations that deal with the Iranian energy sector came after the US unilaterally withdrew from the 2015 Iran nuclear deal, reinstating sanctions and putting even higher pressure campaign on the oil-rich country.

The latest sanctions, however, were prompted by a new escalation of tensions in the Middle East after Saudi Arabia's oil facilities were attacked by drones on 14 September.

Though the Yemeni Houthis claimed responsibility for the attack, a number of countries including the US, Saudi Arabia, Germany and the UK have accused Iran of being behind the attack, while the latter has denied all accusations.

Following the incident, the US imposed fresh sanctions against Tehran, targeting the Central Bank of Iran, the National Development Fund of Iran and Etemad Tejarate Pars Co, a company the US claims was used to hide financial transfers for Iranian military purchases.