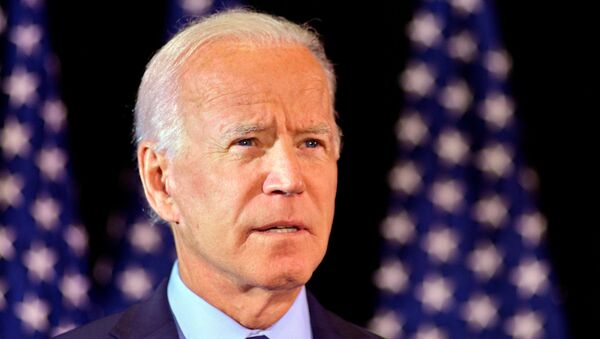 Tim Korso
All materialsWrite to the author
The former vice president and frontrunner in the Democratic primaries, Joe Biden, has recently ended up in hot water as allegations have surfaced that he could have pressured the previous Ukrainian presidential administration to sack a prosecutor investigating a local gas firm and Biden's son, Hunter, who was a board member there.

The brother of the former US vice president, James Biden, has found himself at the epicentre of a scandal as he is being sued over allegedly misusing the name of his famous relative and VP in the Obama administration, Politico reported. Michael Frey, head of the healthcare firm Diverse Medical Management, which is suing Biden, insists that James had promised to enlist his brother to promote the products of the company Integrate Oral Care and get his business partners to invest $3 million in it.

A spokesperson for James Biden dismissed the accusations as "pure fantasy", insisting that the whole lawsuit against him is "frivolous".

"We are not surprised that such baseless accusations have emerged during the Democratic primaries", said David Fuscus, a spokesman for James Biden and his business partners at Platinum Global Partners.

The accusations come amid intense competition between Democratic contenders to become their party’s presidential nominee in the 2020 election, with this now becoming the second time that Joe Biden's name comes up in issues pertaining to his relatives’ business ties.

Recently, a scandal erupted around US President Donald Trump over a whistleblower's allegations that he had "pressured" his Ukrainian counterpart Volodymyr Zelensky to initiate a probe into Joe Biden for allegedly misusing his influence to end an investigation involving his son, Hunter Biden. The latter was a suspect under investigation over alleged illegal activities of Ukrainian natural gas firm Burisma, where Hunter was a board member.

The investigation ended with the sacking of the Ukrainian prosecutor behind it - Viktor Shokin. Ukrainian Prosecutor General Yuriy Lutsenko later alleged that Joe Biden, during his time as US vice president, had pressured former Ukrainian President Petro Poroshenko to fire Shokin in a bid to get his son out of trouble. Biden denies even having discussed his son's business dealings, something that contradicts Hunter Biden's own statements.

PranSa
26 September 2019, 23:09 GMT1
000000
PranSa, most interesting observation, it seems to run in the family, is scamming genetically motivated then?