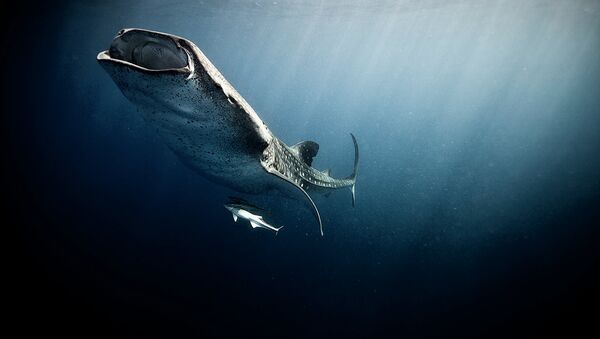 © Photo : Jorge Cervera Hauser
Subscribe
New Delhi (Sputnik): A video clip of a whale shark being held captive by fishermen in the Indian state of Odisha has prompted authorities to swing into action and launch a probe into the matter.

The whale shark, protected under the Wildlife Protection Act, was allegedly sold by fishermen in the coastal state for about Rs. 800,000 ($11,000) to a Chennai-based pharmaceutical company, as per an Odisha Sun Times news website report.

In the video, a giant whale shark can be seen on the vessel, with several men trying to push it. By the end of the recording, a man is found standing on the whale. However, it couldn’t be established whether the fishermen were trying to push it back in the water or vice versa.

Giant Fish In #Odisha Waters: A Whale Shark weighing over 1 quintal caught by fishermen in Chandbali #Bhadrak; the fish has reportedly been sold to a Chennai-based businessman at a whopping Rs 7.49 lakh pic.twitter.com/J4arjJD9ZG

The video clip soon went viral after being posted on social media. The clip of the whale shark, whose fins carry a high price on the international market, led to uproar on social media.

@peta @PetaIndia @WildlifeProtect @ocean_climate
Fisherman in Westbengal and Odisha are catching these whale shark and black marketing it for a lot of money.
Kindly take some step we really are concerned about it. pic.twitter.com/ONX8ake6MJ

Who will give permission to sell & bye schedule (1) of #wildlife protection Act first fish #whaleshark on the list. This fish under #rihnocodon types. #Hunting whale shark is an offence. Dept. can take action against seller & buyer. @CMO_Odisha @ForestDeptt @MinistryForest pic.twitter.com/LtAeu1lHvH

It’s not catch, it was need to be released not sold dear . U can’t support it. Feeling bad for dt fish who got caught in d land of Jagannath.

​Whale sharks are often sighted off the coastal states of India adjoining the warm waters of the Bay of Bengal.

In a separate incident earlier, a baby whale shark was rescued and released into the sea after it was found washed up on the shore by residents in Indian state of Odisha.