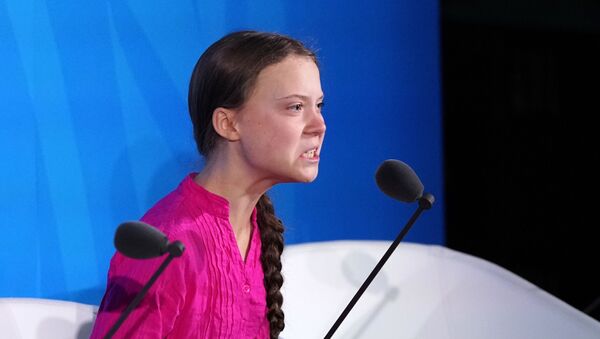 Jon Gaunt
All materials
Is it just me or is Greta Thunberg getting on your nerves too? Why is this young woman getting so much attention and why are people taking her seriously? All kids worry about the end of the world then they grow up or am I being too harsh?

I posed this question on Twitter a few days ago and the overwhelming response was that instead of being too harsh I was in fact being too gentle to the ‘Eco Messiah’.

Did you see her speech at the UN? It was incredible and frightening in equal measure. Not her doom-laden prediction that the world was going to end but the manner in which she delivered it. The trembling lip, the stare, the accusations and of course the tears.

It only confirmed my long-held belief that this young girl is being used and abused by the environmental ‘nut jobs’ who are seem to be drafting her scripts.

In turn the eco nut jobs, just like the Vegans, are being used and exploited by a globalist elite who just want more excuses to tax us to death and stop us travelling or experiencing the world.

Environmentalism is the new religion and is being used as a form of control, almost an opium of the people.

However, the problem for the elite is that the masses are not really biting or buying this climate change scare story. Most ordinary sane people care about the whales, the smog, plastic in the ocean but they’re not buying all the propaganda.

So, enter stage left, the child prodigy who proceeds to help with a compliant MSM to try and scare the living daylights out of us.

At this point let me make it clear I do believe in global warming although my ‘personal jury’ is still out on how much this is down to man but I do believe we all need to take the subject seriously. I do believe in recycling and not using single use plastic and I take my own bags shopping but come on, this climate hysteria is now going too far.

The sheer hypocrisy of the adult zealots beggars belief, of course led by woke Megan and Harry and ably supported by First Class flying luvvie Emma Thompson but why are Governments paying so much attention to a 16-year-old with pig tails?

The eco warriors moaned when Trump wouldn’t play their climate game but when he did turn up at the UN yesterday for 15 minutes they still slagged him off and Greta went into full ‘dying fly at the supermarket checkout’ mode. Did you see the way she glared at the President of the Free world?  It was terrifying and side splittingly funny at the same time?

Returning to my original tweet, as I say when I was a kid, a bit younger than Greta, the end of the world terrified me too. There was a bloke called James Burke on the BBC who did brilliant science programmes that were always telling us the world was going to end.

The generation previous to me had the real and present danger of the cold war and the Bay of Pigs.

Back to me, we had programmes like Survivor and Threads and dire warnings that the Russian’s were going to nuke us and the advice was to hide under the kitchen table! No doubt the Russians were fed the same horsesh*t by their government too.

So, what kid hasn’t been scared of death but then as you mature you realise that death is the ultimate negative and there is nothing you can do about it as we are all on the same journey, it is called growing up.

Surely the media should understand this and realise they are being played by people who have much more on their minds than just the environment.

We’ve seen it expressed this week at the Labour Conference because the same agenda underlines Labour’s desire to seize the assets of private schools and abolish the choice of private education.

These fanatics also want to look at super taxing those people lucky enough to have a holiday home, paid for of course usually by working extra hours. There was even the ridiculous debate headed by Labour loving legal expert Michael Mansfield that Meat eating should be banned and should be treated like smoking to save the planet.

Of course, to push all this Cultural Marxist mumbo jumbo what better than a young woman? No one would dare to criticise her, would they, for fear of being removed from social media or even ‘polite society”.

As a result, Greta is being elevated to almost God Like status by her manipulators and stupid disciples. She is like the last Child Emperor of China. This is frankly ridiculous, sinister and I am afraid dangerous.

She and the people behind her are organising and encouraging children to strike on schooldays to save the planet and the MSM are tacitly supporting this tosh.

The idea that Greta and the other young brats who follow her have had their future stolen from them is laughable.

Have you ever met a kid who turns the heating down, isn’t constantly on their mobiles or computer games, don’t want to have a car at 17, never want to walk anywhere? So, what are they doing to save the planet? Oh yes, wagging school and calling Trump a C*nt on the streets of the capitals of the world.

The fact that Trump doesn’t believe their hogwash only helps their campaign and is used by the MSM to justify their blind allegiance to their new religion. The logic of course being, Trump is thick, a moron, a misogynist, a racist and therefore a climate denier. He is the enemy of liberalism and therefore if he thinks the Paris accord on climate change is BS then it clearly isn’t.

The busted flush of the UN sees this cause as a way of them having some relevance in the world which of course it hasn’t. It is the USA and Russia who call the shots and increasingly the uber-polluting China and India.

But now we are being told by world leaders and the media that we should actually take these kids seriously. It is the same agenda that states that the voting age should be reduced to 16 or that the Brexit vote was three years ago and the people who voted for it are all dead, whereas as young people who have just turned 18 haven’t had a chance to vote for it. This is all the warped logic of youth and should be dismissed as such.

But it is not being dismissed, it is being taken seriously and we have to question why.

I am more and more convinced that the MSM in the west is actually not being duped or played. Instead they are part of the same problem. They are protecting their turf as much as someone like Corbyn by jumping on this bandwagon, as much as the UN trying to find a purpose in their life.

The real threat to the world I am afraid is not man-made global warning but this Global, largely unelected, elite with their agenda of control. This is what we should be protesting in the streets about rather than letting school kids and their manipulators hold our capital cities to ransom.