What Was That? Twitter Baffled By Trump’s ‘Unhinged Rambling’ at UN Presser 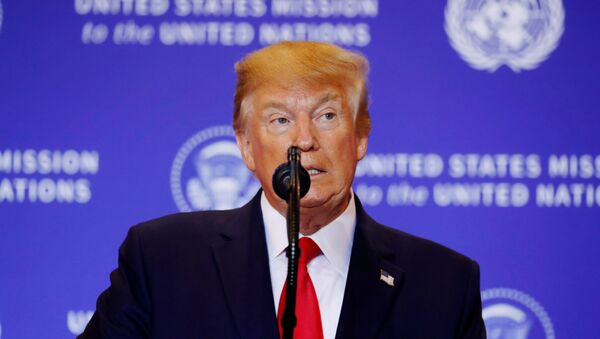 © REUTERS / JONATHAN ERNST
Subscribe
International
India
Africa
As the UN General Assembly came to a close Wednesday, US President Donald Trump told gathered reporters about the event’s proceedings. However, few wanted to hear about diplomacy - everyone wanted to know about the impeachment proceedings against him, but Trump clearly didn’t want to address it. Twitter noted his dodging and blasted him for it.

It seemed like Trump talked about everything on the planet except the impeachment inquiry. He recapped all the mundane points of the UN General Assembly, including listing every single country whose representatives he met with during the event and all of the problems he was fixing in those relationships.

While Trump did speak about the July 25 phone call with Ukrainian President Volodymyr Zelenskyy, the transcript of which he released earlier on Wednesday, and the hushed up whistleblower report about it, he dismissed the Democrats’ understanding of the issue and their actions, accusing the media present of only wanting to focus on the scandal and not on his diplomatic work.

“They don’t care about our country, they care about the election,” he said of Democrats pushing the investigation of him, before zeroing in on House Intelligence Committee Chairman Adam Schiff and House Judiciary Chairman Committee Chairman Jerry Nadler. “They lie and lie. They must laugh their asses off.”

Many zeroed in on the president’s demeanor, noting he seemed tired, defeated and sad.

He sounds really defeated and sad.

​However, others were just really puzzled by the “unhinged rambling” as Trump plodded from topic to topic. One called the presser “insane.”

Anyone who thinks Trump is playing 37-dimensional chess and wants impeachment bc it will help him, need only look at his increasingly unhinged and rambling pressers to know that's bullshit. He's playing one-dimensional Hi Ho Cherry-O against himself, and losing...

​One journo questioned how history would remember the bizarre event.

I'm not sure history will regard that as a news conference.

​Folks at Comedy Central’s “The Daily Show” were just plain baffled about how to react.

​Others chided Trump for his choice of words and the topics he veered into, including praising politicos on his own side and listing off all the countries he’d spoken with.

"Give me four walls" is a very unfortunate choice of words by @realDonaldTrump just now.

When your boys support you emotionally >>>>> https://t.co/v1xdFbrIkG

me coming back from my study abroad pic.twitter.com/D6nDlbiY6O

Perhaps we all got punked, and Trump just held a free political rally in New York with mainstream media coverage?