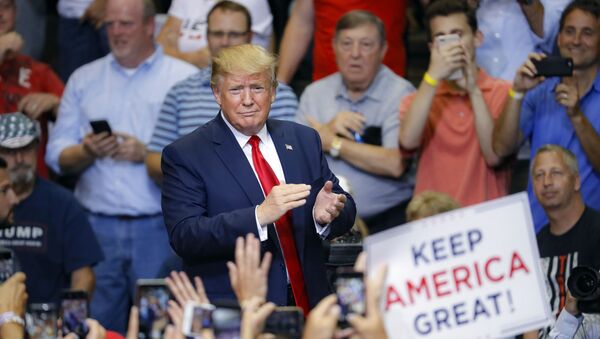 © AP Photo / John Minchillo
Subscribe
International
India
Africa
In June 2018, Washington imposed the first round of tariffs on Chinese imports, prompting Beijing to respond in kind. Since then, the two countries have exchanged several rounds of import duties and are engaged in talks to settle their trade-related disagreements.

Earlier in September, US President Donald Trump said the United States would delay imposing an additional 5 percent tariff on $250 billion worth of Chinese imports until 15 October.

The US president has noted that China is very interested in reaching a trade deal because of the problems its economy has been experiencing. According to Trump, Washington and Beijing may reach a trade agreement sooner than it has been expected.

Claude Barfield, economist, Consultant to the office of the US Trade Representative shares his view on the issue.

Sputnik: Trump said that he “doesn’t need a trade deal with China: before the 2020 election. How serious is he in this statement? What is he trying to achieve with such rhetoric?

Claude Barfield: I think we’re still in a kind of a game-playing back and forth in terms of the current negotiations.

As you may know the Chinese have sent the delegation of deputies here this week. I think they are meeting today or yesterday, in the middle of the weekend.

And they’re still going back and forth about what will be on the agenda if there is a full-fledged negotiation in the early October.

So part of this is kind of a game playing by Trump.

He is trying to signal the Chinese that he is not going to accept just a partial deal, which means he wants some changes in the structural as well as new purchases in agricultural bit, things like that.

So we just have to see, it is kind of a political game-playing.

It may very well be to his interest to as well as to the Chinese interest to put off a major deal until after the election.

The problem from the Chinese side is, well, Trump is held off on some of the new tariffs. We still have a lot of tariffs on Chinese goods. And he is certain to put more on. That could be really what they are negotiating.

Sputnik: And should we expect any change in his position regarding China before the elections?

Claude Barfield: No, I mean, I think if they make some sort of a partial deal it will be in a success for the US.

Everything he is playing to the election 2020.

And he will be open to criticism from trade hawks. And also the Democrats are trying to have it both ways: they are complaining about the tariffs and they want to make political hay in the Midwest with farmers.

But on the other hand, they are still [want] Trump to stick to his guns and take a hard line. And since they are not in power they can do this.

So there is a delicate line in terms of the politics. My guess would still be that… He is not going to take off all the tariffs.

There is still going to be some kind of an intern deal, next month I guess. It all could blow up, you just never know.

Sputnik: Should we expect an increase in current tariffs from both sides? If so how harmful could they be?

Claude Barfield: That would depend on the “Winds of Trump”. I think the way this is played out is that the Chinese react to what we do.

If we put our own or raise the tariffs they will counter that to some retaliation.

They’ve never done so to the extent that we have.

There is one fact they have to deal with is that we have a huge trade deficit with them.

What we export to them is not as large as what we import from them so there isn’t much to play with actually.