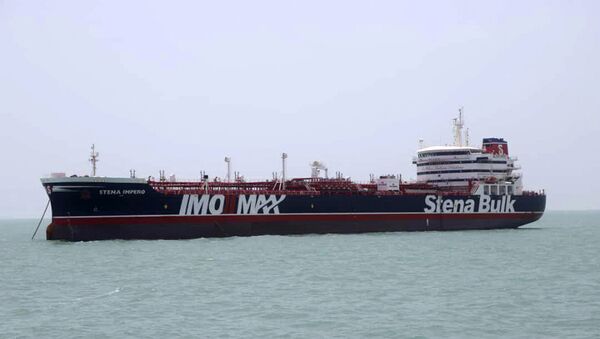 © AP Photo
Subscribe
Earlier, Iranian media had reported that the British tanker had left the port of Bandar Abbas, where it had been detained for over two months amid the ongoing diplomatic row between Iran and the UK.

The lifting of the Stena Impero's detention has been finalised on Wednesday, but the tanker still faces charges, Iranian Foreign Ministry spokesman Abbas Mousavi said in a tweet.

"The lifting of the detention order against Stena Impero was finalised today, but the investigation of some of its violations and environmental damage remains open," Mousavi wrote.

"The owner and captain of the ship have made a written commitment to accept the court's decision in this regard," he added.

Earlier Wednesday, Erik Hanell, president of Stena Bulk, the company which owns the Stena Impero, told Reuters that "At this point, we are simply waiting for the guards onboard to leave and for the ship to receive clearance to sail."

Earlier this week, Hamid Baeidinejad, Iran's ambassador to Britain, said that the ship would be free to sail after certain legal issues were dealt with.

Later, Ports and Maritime Organisation chief Mohammad Rastad said that the "detention order on the Stena Impero had been lifted and the vessel is going through proceedings to leave Bandar Abbas port."

On Tuesday, Iran's Tasnim news agency reported, citing the TankerTrackers oil tanker tracking service, that the Stena Impero was no longer anchored at the Bandar Abbas port where it had been held. Iranian authorities did not immediately confirm the authenticity of the reports.

Seven of the ship's 23 crew had been released earlier this month, with the remaining 16 crewmembers told to stay onboard to enable the ship to leave port after its release.

Iranian authorities detained the Stena Impero on July 19 as it was sailing through the Strait of Hormuz, accusing it of ramming a small Iranian fishing vessel, ignoring the instructions of local maritime traffic authorities, and turning off its transponder. UK authorities denied that the ship had done anything wrong, and accused Iran of engaging in "piracy."

The ship's detention prompted the UK to propose the creation of a European-led 'maritime security coalition' in the Gulf, but London later decided to join the US-led coalition instead, prompting UK allies France and Germany to drop their interest in the idea. Tehran slammed London, Washington and any other outside powers seeking to introduce military forces into the region, and has called on regional countries to ensure security in the area independently.

The Stena Impero was seized following a similar incident in early July, where Gibraltar authorities and British Royal Marines intercepted, boarded and detained the Grace 1 (now known as the Adrian Darya 1), a tanker carrying Iranian oil through the Strait of Gibraltar. UK authorities said they had been tipped off by US authorities that the Grace 1 was carrying its cargo to Syria, in violation of the European Union's sanctions against Damascus. Tehran called the seizure "piracy" and demanded that the ship be immediately released. Gibraltar authorities released the ship in mid-August, with the US immediately issuing an arrest warrant to seize it. Last week, Iran reported that the oil tanker had unloaded its cargo, but did not specify the buyer country.

The tanker tensions between Iran and the UK brought relations between the two countries to a decades-long low. Previously, the UK and other European powers had attempted to work out an agreement by which Iran could effectively bypass tough US banking and energy sanctions following Washington's withdrawal from the 2015 Iran nuclear deal, to which London remained a party after the Trump administration scrapped the agreement in May 2018. On Tuesday, Iranian Foreign Minister Mohammad Javad Zarif accused the nuclear deal's European signatories of waffling on their commitments, urging them to "forge an independent path" instead of "parroting absurd US claims and requests INCONSISTENT with the [nuclear deal]."