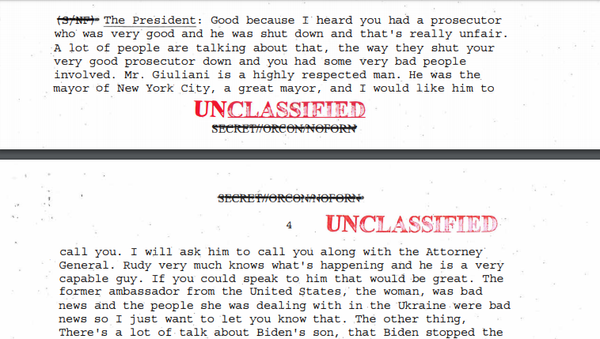 The White House has released a transcript of the controversial 25th July call between Donald Trump and Ukrainian leader Volodymyr Zelensky – meanwhile, US lawmakers have begun a formal impeachment inquiry into the content of their conversation.

Not long after the call ended, an intelligence community ‘whistleblower’ lodged a complaint about Trump’s conduct during the chat. The exact contents of the complaint haven’t been released, but ever since senior Democrats have claimed the President had attempting to boost his reelection prospects by pressuring Zelensky to contact Attorney General William Barr and allege Joe Biden lobbied Kiev officials to benefit his son Hunter’s private-sector work in Ukraine.

Moreover, they suggest Trump threatening to withhold aid from the country – which he has admitted – was intended to force Zelensky’s hand on the issue.

For his part, Trump and members of his administration have alleged Biden dangled the prospect of US financial support to coerce the Ukrainian government into firing its top prosecutor Viktor Shokin in 2016, at a time he was investigating Ukrainian energy company Burisma, and allegedly Hunter.

​For his part, Trump claims it’s merely a matter of not wanting “our people”, like former Vice President Biden and his son, “creating the corruption already in the Ukraine”.

While the Wall Street Journal reported, based on anonymous briefings, that Trump asked Zelensky eight times to investigate Biden’s son and his work in Ukraine, in the transcript Trump mentions Biden thrice, as part of a wider discussion about the origins of the ‘Trump-Russia’ probe.

Noting the US does “a lot” for Ukraine, spending “a lot of effort and time” – “much more” than European countries, “who should be helping you more than they are”, are doing – the President asks for a favour.

“Our country has been through a lot and Ukraine knows a lot about it. I would like you to find out what happened with this whole situation with Ukraine, they say CrowdStrike...I guess you have one of your wealthy people...The server, they say Ukraine has it. There are a lot of things that went on, th whole situation…I think you’re surrounding yourself with some of the same people. I’d like to have the Attorney General call you or your people and I would like you to get to the bottom of it…That whole nonsense ended with a very poor performance by a man named Robert Mueller, an incompetent performance,  but they say a lot of it started with Ukraine,”  Trump enquires.

1/ Transcript shows Trump first asks Zelensky to help Barr/DOJ probe into Russiagate's origins (recall that Ukrainians bragged about giving dirt to DNC https://t.co/9kv66xyh5N). Zelensky brings up Giuliani. Only one mention of Biden -- and there's no quid pro quo, not even close. pic.twitter.com/1Q4tCyvNvm

​In other words, the President was referring to allegations the Democratic party colluded with Ukrainian officials to perpetuate smears alleging Trump had ties to the Russian state ahead of the November 2016 Presidential election.

He goes on to state he heard Ukraine had a prosecutor “who was very good” but was “shut down”, which was “really unfair”.

“A lot of people are talking about that, the way they shut your very good prosecutor down and you had some very bad people involved. [Rudy] Giuliani is a highly respected man. He was the mayor of New York City, a great mayor, and I would like him to call you. I will ask him to call you along with the Attorney General…The other thing, there's a lot of talk about Biden's son, that Biden stopped the prosecution and a lot of people want to find out about that so whatever you can do with the Attorney General would be great. Biden went around bragging he stopped the prosecution so if you can look into it…It sounds horrible to me,” Trump adds.

While mainstream media outlets have almost universally presented Trump’s request as potentially suspicious, the actual contents of the conversation are a far cry from allegations that a “promise” was sought by Trump, with penalties for non-compliance. For one, no mention of US aid to Ukraine being reduced or stopped outright is made at any point, whether directly or indirectly – and in response to Trump’s requested “favour” Zelensky merely notes his country’s next prosecutor general will be his candidate, who will reopen the investigation of Burisma, and probe why it was closed in the first place.

Wow. The amount of reaching is actually quite remarkable. Shows you’re very creative

​Furthermore, the Ukrainian President makes clear the question of whether the inquiry was nobbled, and by whom, is also an issue of intense interest to him, and forms part of a wider push to “drain the swamp” and “have a new format and a new type of government” in the country.

“The issue of the investigation is…actually the issue of making sure to restore honesty [in the country], so we will take care of that and will work on the investigation of the case. On top of that, I would kindly ask you if you have any additional information you can provide to us, it would be very helpful for the investigation to make sure we administer justice in our country,” he states.

The abject lack of a ‘smoking gun’ in the transcript – and indeed the content clearly contradicting pre-release speculation – may account for why Democrats have now demanded to see the full complaint that was lodged, and for the staffer who lodged it to testify before Congress about their concerns.