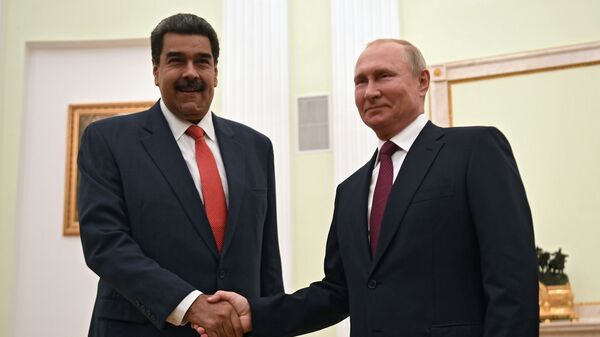 MOSCOW (Sputnik) - Russia supports Venezuela's legitimate authorities, including the institution of the president, as well as the dialogue of the country's leader Nicolas Maduro with the opposition forces, Russian President Vladimir Putin said at a meeting with Maduro on Wednesday.

"Russia consistently supports all the legitimate power bodies of Venezuela, including the institution of the president and parliament. And we certainly support the dialogue that you, Mr President, and the government are holding with the opposition forces. We consider any rejection of the dialogue to be irrational, harmful to the country and bearing only threats to the welfare of the population," Putin said.

Russia is delivering spare parts to Venezuela and creating service centres in the country as scheduled, in line with existing defence cooperation agreements, President Vladimir Putin said on Wednesday.

"All this work is being carried out as scheduled, in strict compliance with our agreements," Putin said.

The two countries' defence cooperation currently mainly lies in Russia fulfilling its commitments on the maintenance of Russian-made equipment purchased by Venezuela, Putin said at his meeting with Venezuelan President Nicolas Maduro.

On Tuesday, Maduro arrived in the Russian capital of Moscow, accompanied by Oil Minister Manuel Quevedo. Both Venezuelan officials are likely to visit the office of Venezuela's state oil company PDVSA, opened in Moscow earlier in September, according to a source.