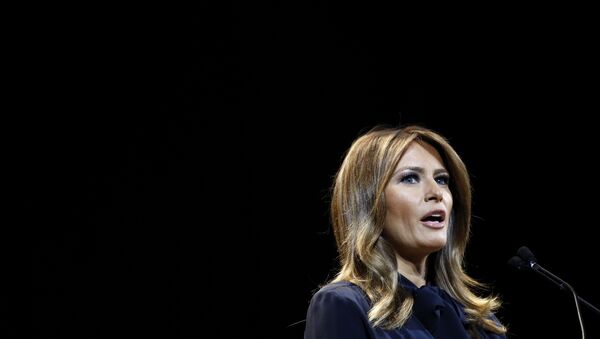 Svetlana Ekimenko
All materialsWrite to the author
Swedish climate activist Greta Thunberg made an impassioned plea to the UN during her address at the Climate Action Summit Monday raging at state leaders for inaction on the challenges of climate change.

Melania Trump's #BeBest anti-bullying initiative has found itself in the spotlight as her husband, US President Donald Trump, was seen as mocking 16-year-old climate activist Greta Thunberg on Twitter.

"She seems like a very happy young girl looking forward to a bright and wonderful future. So nice to see!" he tweeted Monday night.

​The President’s tweet came in response to a video of Thunberg's speech at the United Nations climate action summit earlier in the day.

In the video, Thunberg, seemingly barely able to contain tears, says her generation "will never forgive" adults if they don't take immediate action on climate change.

The sitting President of the United States is gleefully cyber-bullying a 16 year-old girl with aspergers because she's passionate about saving humanity from itself.

Really great job on your #BeBest campaign there, Melania. https://t.co/KQ21WWZ1mK

The president of the United States is smugly mocking a 16 year old girl. On a personal level. Wow. Just.. wow. #BEBEST. https://t.co/bte5s2gfx4

​On Monday, the Swedish climate activist gave an impassioned speech at the UN’s Climate Action summit in New York, decrying older generations for failing to do enough to tackle the climate crisis.

“You have stolen my dreams and my childhood with your empty words, and yet I’m one of the lucky ones. People are suffering. People are dying. Entire ecosystems are collapsing. We are in the beginning of a mass extinction and all you can talk about is money and fairytales of eternal economic growth. How dare you!”

The Youth climate activist was also critical of the limited ambitions at the summit, arguing that none of the plans presented by countries are in line with the more ambitious targets from the Paris climate agreement.