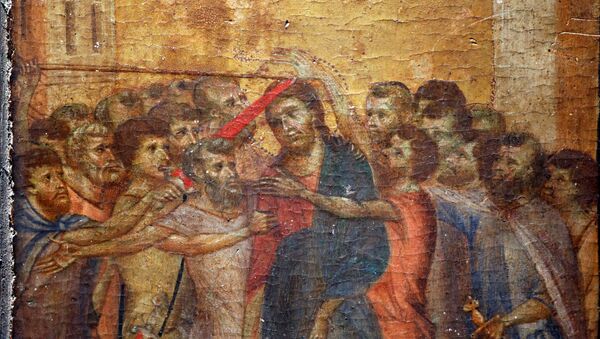 © REUTERS / CHARLES PLATIAU
Subscribe
A masterpiece painting from the 13th century by the Italian painter known as Cimabue was found casually hanging in the home of French woman - reported to be in her 90s - living in the town of Compiègne.

The painting was discovered when French auctioneer Philomène Wolf showed up at the woman’s house to appraise her belongings. The unsuspecting woman, who thought that the painting was a religious icon, had no idea how rare the artwork, which depicts Jesus’ entry into Jerusalem before his crucifixion, really was.

“The lady said she thought it had belonged to her family for a long time, but that it was just a religious icon,” Wolf said, the Guardian reported. “It could well have been destined for the bin.”

The painting, titled “The Mocking of Christ” and measuring 20 centimeters by 24 centimeters, was valued at more than $6 million, according to Paris art expert Eric Turquin.

Turquin also confirmed that the painting belonged to an eight-part diptych created around 1280 by Cimabue, who is also known as Cenni di Pepo and is considered to be one of the greatest Italian painters of the pre-Renaissance era. Two other pieces in Cimbabue’s series, the “Flagellation of Christ” and the “Madonna and Child Enthroned between Two Angels,” are currently displayed at the New York Frick Collection and the London National Gallery, respectively.

“We can see the likeness in the facial expressions, the movement and the tentative perspective that define Cimabue’s contribution to art,” Stéphane Pinta, an art specialist who works with Turquin in Paris, is quoted as saying by AFP.

“This kind of find is what we wake up for every morning,” said Pinta, calling the painting “a major discovery.

“Cimabue is the father of Western painting, the one who broke with the rules of Byzantine art, introducing the rudiments of expression and perspective.”

“The number of surviving panel paintings by Cimabue is small – fewer than ten accepted works. So this painting is a hugely important discovery for Cimabue's oeuvre,” she added.

The painting will be auctioned in France next month.

PranSa
25 September 2019, 23:09 GMT1
000000
White, Brown Hair, Red Bearded Jesus? Long Lost Italian Masterpiece Worth Millions Found Hanging in French Woman’s Kitchen. A early Pope dictated all drawings of the ultra-black Ethiopian Mary, alleged mother of Jesus be 'burned' and then trotted out a 'White Race' Jesus. Who would have been shunned like a Albino in the Hebrew tribes, If ancient Jesus ever lived, he was likely blacker than Barack Obama.