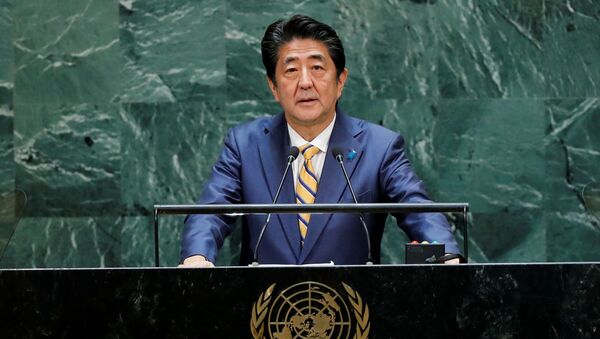 The prime minister of Japan, Shinzo Abe, while speaking at the 74th United Nations General Assembly, noted that both the United Nations and the UN Security Council should be reformed.

Japanese Prime Minister Shinzo Abe has called for structural reforms of the UN Security Council, expressing hope for the swift realization of such reforms.

"We aim for the early realization of such reform. In addition, Japan is standing in the 2022 election, by once again receiving the support of numerous countries we wish to serve as a non-permanent member of the Security Council and make our best efforts towards the further realization of the principles of UN," Abe said.

In July, UN General Assembly President Maria Fernanda Espinosa Garces expressed hopes that a resolution pertaining to the reformation of the UN Security Council would be adopted this year.

Speaking at a session of the Valdai discussion club, Espinosa stressed that the UNSC should be reformed to improve communication between the organization's members and coordination among its bodies.

"We need to strengthen the office of the President of the UNGA. We must improve our communications and relations with stakeholders. That is clear. And we need to improve coordination between the UN principle bodies. That are the core of the reform process," the UNGA president said.

The UNSC has five permanent members — China, France, Russia, the United Kingdom and the United States — all of which have veto power, as well as 10 non-permanent members. However, politicians from a number of countries have repeatedly called for the institution to be reformed to reflect the current world order and realities.

Abe said at the UN General Assembly that he was ready to hold a meeting with North Korean leader Kim Jong Un without preconditions, in an effort to support the positive trajectory Washington has initiated with regard to Pyongyang.

"Japan supports the approach taken by President Trump, the approach by which the two leaders talk candidly with each other and try to work out the issues at hand, while seeing a bright future ahead, has changed the dynamics surrounding North Korea," Abe said."I am determined to meet Kim Jong Un myself face-to-face without attaching any conditions."

North Korean leader Kim Jong Un has been calling for more flexibility on the part of Washington, particularly with regard to sanctions, amid stalled talks between Pyongyang and the United States on the stabilization of the situation on the Korean peninsula.

This week, media reported that the United States and North Korea are likely to continue denuclearization talks within two or three weeks, which could pave the way for a third summit between Trump and Kim.

"The attack on Saudi Arabia’s crude oil facilities was an extremely contemptible crime that holds the international economic order hostage," Abe said in his address at the UN General Assembly.

The prime minister stressed that Japan shares the global concerns regarding the Middle East situation, but praised Iran for its promise to stick to certain nuclear obligations.

"I consider precious the pronouncement made to me directly by Supreme Leader Hassan Rouhani of Iran that he issued … three repudiations regarding nuclear weapons, namely not to possess, produce or use them,"

The drone attacks on two Saudi Aramco plants, in Abqaiq and Khurais, were carried out earlier this month. As a result of significant damage done to the facilities, the production of about 5.7 million barrels of crude oil per day was suspended, which is about half of Saudi Arabia’s total daily output.

The Houthi rebel movement in Yemen has claimed responsibility for the drone attacks on Saudi Aramco facilities. The Saudi Defence Ministry has presented what it described as evidence of Iran’s involvement in the attacks, but Tehran has refuted all accusations.

Washington has also put the blame for the attacks on Iran, as well as a number of European countries.