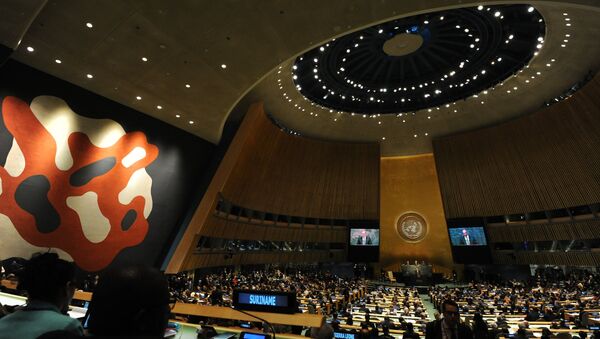 The first day of the UN General Assembly General Debate was opened by UN Secretary-General Antonio Guterres, who warned about an “alarming possibility of conflict” in the Persian Gulf in the wake of the 14 September attacks on Saudi oil facilities. Although Yemen's Houthi movement, which has used drones in the past to attack Saudi Arabia, has claimed responsibility for the drone strikes, a number of nations have been quick to blame them on Iran – allegations that Tehran categorically denies. The Secretary General's sentiment was in some ways reflected by a number of world leaders, many of whom mentioned Iran in their speeches.

US President Donald Trump said in his speech that sanctions against Tehran will only be tightened, “as long as Iran continues its menacing behaviour.”

"All nations have a duty to act. No responsible government should subsidise Iran's bloodlust," he said in his speech.

However, Trump hinted at the possibility of a peaceful solution.

"America knows that while anyone can make war, only the most courageous can choose peace," he said from the UN tribune.

He also said the US will not ratify the UN Arms Trade Treaty, which regulates the international trade in conventional weapons. The United States is one of 32 states which have signed but haven't ratified the agreement.

Trump also stated that the world’s future “belongs to patriots”, not “globalists”, as the former “respect their neighbours and honour the differences that make each country special and unique”.

French President Emmanuel Macron, on the other hand, called for Iran, the US and the Nuclear Deal signatories to resume negotiations, adding that all conditions for the talks have already been set up.

"More than ever, I … believe that the time has come to resume negotiations between the United States of America, Iran, the signatories of the JCPOA (Joint Comprehensive Plan of Action) and the countries of the region which are first and foremost affected by the security and stability," Macron said. "I believe that the conditions in this context for a rapid return to negotiations have been created.”

Japanese Prime Minister Shinzo Abe spoke about Iran as well, cautiously warning that the attacks on Saudi facilities constituted “an extremely contemptible crime that holds the international economic order hostage," but adding that he considers precious the pronouncement made by Supreme Leader Hassan Rouhani of Iran, that he issued "three repudiations regarding nuclear weapons, namely not to possess, produce or use them”. 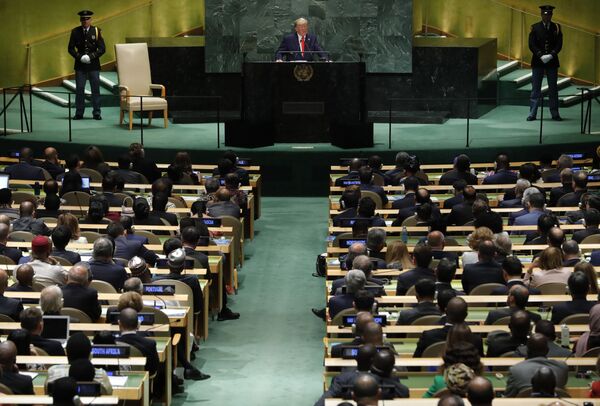 UK Prime Minister Boris Johnson only briefly mentioned Brexit, which is at the moment the most critical issue of his tenure. Instead, the British prime minister delivered an energetic speech about the dystopian dangers of improperly regulated technology.

Turkey’s President Recep Tayyip Erdogan, for his part, focused on the situation in Syria’s Idlib Governorate and called on the global community to ramp up assistance to stop a mass exodus from the province, which shares a border with his country.

"We need to do everything possible to prevent a possible massacre in the city of Idlib and an immigration influx of four million. The memorandum we reached with Russia in Sochi still remains valid despite some setbacks. Turkey cannot bear another migration influx," he said.

Turkey is already home to over four million refugees, over half of which are from neighbouring Syria.

Erdogan also raised eyebrows by demanding that nuclear weapons should be allowed to every country or banned for everyone as well.

“It bothers us like anyone else that the weapons of mass destruction are used as leverage in every crisis instead of their total elimination. The possession of nuclear power should either be forbidden for all or permissible for everyone," Erdogan said.

South Korean President Moon Jae-In called on closer ties with North Korea, saying that his nation will “guarantee the security” of its northern neighbour and that he hopes Pyongyang will do the same for Seoul.

In his call for closes ties, he proposed to transform the demilitarised zone (DMZ) between the two Koreas into an “international peace zone” which would house UN offices and other international organisations.

On Wednesday, the debate will continue, starting with President of Ukraine Volodymyr Zelensky, and will feature another 38 speakers, including the President of Iran, Hassan Rouhani.