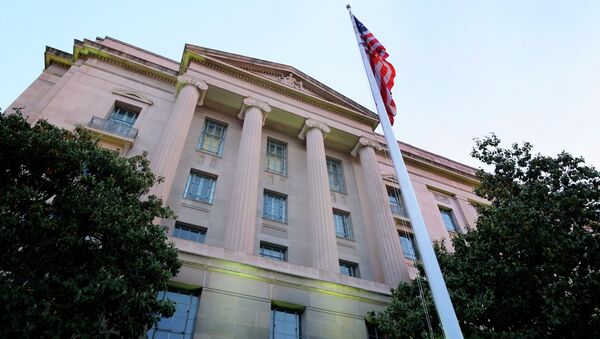 WASHINGTON (Sputnik) - Former US intelligence officer Ron Hansen has been jailed for ten years for attempting to sell military secrets to China, the Justice Department said in a press release.

"A former Defense Intelligence Agency (DIA) officer, who pleaded guilty in March to attempting to communicate, deliver, or transmit information involving the national defense of the United States to the People’s Republic of China, will serve 10 years in federal prison", the release said on Tuesday.

In 2018, the release added, the 60-year old Utah man was arrested on his way to catch a flight from Seattle to China with possession of secret military information.

Hansen in his plea agreement said agents of a Chinese intelligence service targeted him for recruitment in early 2014, and he began meeting with them regularly in China. Hansen also said that in 2016 he began soliciting national security information from a DIA case officer on behalf of Beijing.

In the course of his relationship with the Chinese agents, Hansen received hundreds of thousands of dollars in compensation for information he provided, according to the Justice Department.

Hansen was one of three former US intelligence officers recently convicted of acting on behalf of China, the release said.

According to the DoJ, "Hansen retired from the U.S. Army as a Warrant Officer with a background in signals intelligence and human intelligence. He speaks fluent Mandarin-Chinese and Russian, according to court documents. Upon retiring from active duty, DIA hired Hansen as a civilian intelligence case officer in 2006. Hansen held a Top Secret clearance for many years, and signed several non-disclosure agreements during his tenure at DIA and as a government contractor".

The release also said that “the Chinese government continues to attempt to identify and recruit current and former members of the United States intelligence community. This is a very troubling trend. These individuals must remain vigilant and immediately report any suspicious activity. The Hansen case is an example of what will happen to those who violate the public’s trust and risk our national security by disclosing classified information”.

Hansen’s conviction came as President Donald Trump lashed out at China in a speech to the United Nations General Assembly, accusing it of dishonest practices that prevented the two countries from having a trade deal.