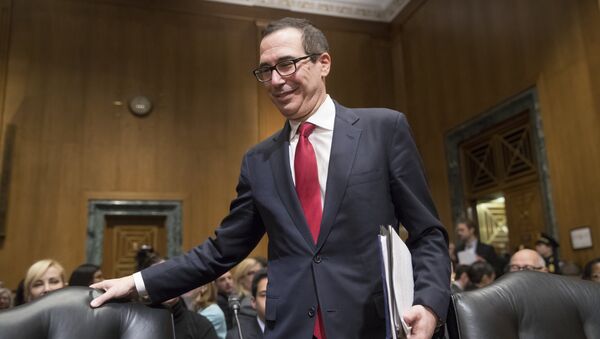 © AP Photo / J. Scott Applewhite
Subscribe
International
India
Africa
US Treasury Secretary Steve Mnuchin said Wednesday that the European Union has assured the United States that Brussels would not do anything - with regard to sanctions against Iran - without Washington's consent.

The situation in the Persian Gulf region worsened after the United States walked out of the Joint Comprehensive Plan of Action (JCPOA), also known as the Iran nuclear deal, in May 2018 and reinstated harsh sanctions on Iran.

Exactly one year after the US withdrawal, Tehran announced that it would be gradually reducing its nuclear obligations every 60 days until EU signatories to the accord ensured Iran’s interests amid US sanctions. Earlier in September, Tehran embarked on the third stage of its rollback plan.

Iranian President Hassan Rouhani said during a speech at the UN General Assembly on Wednesday that the only way Tehran would enter negotiations with Washington is if it returns to the JCPOA and stops imposing sanctions against the country.

US Special Representative for Iran Brian Hook said earlier that Washington would like to see Brussels impose sanctions on those who support what he described as Iran's missile and drone programs, adding that there must be an international effort to counter Iran's activities in the Middle East.

The EU, meanwhile, has established the INSTEX (the Instrument in Support of Trade Exchanges) trade mechanism to ease non-dollar trade with Tehran in the wake of the US sanctions and in an effort to save the JCPOA.

Earlier this month, Brussels agreed to contribute $15 billion to the INSTEX fund. In September, Iranian Deputy Foreign Minister Abbas Araghchi said that the country would resume compliance with the Iran nuclear deal if it received the $15 billion tranche before the end of the year.

The deal provides for the gradual lifting of economic and financial sanctions imposed on Iran by the United Nations Security Council, the United States, and the European Union in exchange for Tehran’s guarantees that the country’s nuclear program would remain peaceful.

US President Donald Trump announced on 8 May 2018 that the United States would withdraw from the JCPOA and restore its sanctions on Iran, lifted by Washington as part of the nuclear deal. The restrictions target not only Iran but also other countries that continue to do business with Iran.

The remaining JCPOA signatories slammed the United States’ move and reaffirmed their commitment to respect their obligation under the deal.