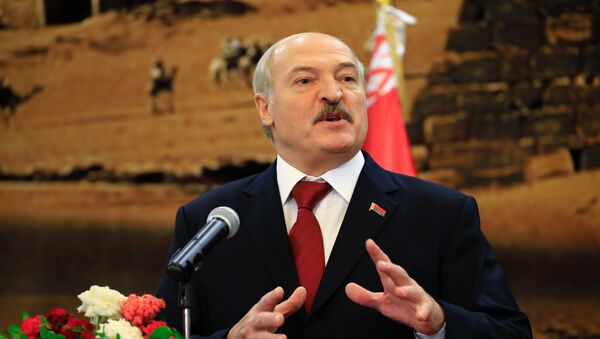 During a visit by the US former presidential national security advisor, John Bolton, to Minsk last month, Belarusian President Alexander Lukashenko reportedly gave presents to the former to give to the US president and his wife.

During a visit to the Karelichy district of the Hrodna region of the former Soviet Republic, the Belarusian leader claimed that his present of luxury fabric made of Belarusian flax delighted Melania Trump.

“We know how to make good fabrics. I recently sent linen products to the wife of the US president. They’re oohing and aahing and asking where to buy it. This shows that we are not able to sell our goods. We’ll have to teach those who have to do it", he said.

Lukashenko made the remarks while inspecting flax plants in the country. Meanwhile, local media outlets have made brief investigations into the matter and claim that Lukashenko's comments about Trump family amazement were purposefully edited, while the section of the Belarusian president's speech containing the "oohing and aahing" referred not to the US president, but to local citizens who reportedly love flax products.

The Belarusian leader gave the luxury native fabric to former US National Security Advisor John Bolton during the latter's visit to Minsk on 29 August and requested that he pass it on to Melania “because she is not a stranger to Slavic flax”.

Lukasheno also gave the president a dirk, a long thrusting dagger meant for hand-to-hand combat and worn on the uniforms of officers and civilian officials in the navies of the former Russian Imperial and Soviet states.

While showing Bolton the allegedly extravagant gifts for the US president and his wife, he then pointed to a present intended for the security adviser himself - a chocolate bar.

“This is Melania, in America this probably is no longer being produced. This is for your president, and this is for you! ”: Lukashenko gave Trump a dirk, his wife - Belarusian linen, and Bolton - a chocolate bar https://t.co/szuoFiqcC1

In 2018, Lukashenko issued advice to Trump, stating that the latter would "have so much more to win" if he gave up his "harsh rhetoric and his behavior". Lukashenko also criticized Trump's decision to wage wars, including trade wars as "not the right way", referencing the US trade conflict with China, a close trading partner of Belarus.

Lukashenko's statement regarding Melania Trump as being no stranger to flax is likely a reference to her origins as a former citizen of Slovenia which at the time was once a part of Yugoslavia, a country with both geographic and ideological proximity to the former Soviet Union and its Warsaw Pact allies.