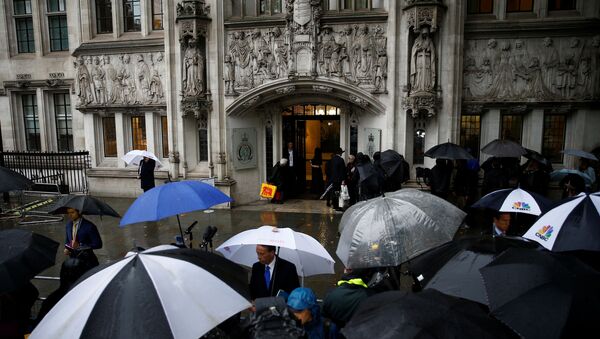 Britain’s Parliament was suspended two weeks ago by the Prime Minister in a special prorogation order, signed by the Queen as head of state. Opponents of a no-deal Brexit say it was unlawful.

The UK Supreme Court has ruled Boris Johnson's decision to suspend Parliament until 14 October was "unlawful".

The Supreme Court also said the UK Parliament can meet "as soon as possible."

Britain’s most senior judge, Lady Hale, sitting with 10 other Supreme Court judges, ruled unanimously that the advice he gave to the Queen was unlawful.

Lady Hale, said: “Parliament, as elected representatives of the people, has a right to a voice... the effect on our elected democracy was extreme”.

House of Commons Speaker John Bercow has instructed that ​the UK parliament shouldl return to work on 25 September.

Never seen a Labour leader do this before. An energised Corbyn takes the stage immediately after the Supreme Court ruling, calling for Johnson to 'consider his position' and for an election (at some unspecified date). 'Johnson out,' the delegates chant in response.

The Labour Party leader, Jeremy Corbyn, said the ruling showed the Prime Minister had acted wrongly and he told delegates at the party's conference in Brighton that Mr Johnson should "consider his position".

The leader of the Brexit Party, Nigel Farage, said prorogation was the worst political decision which had ever been made and he called on Mr Johnson to fire his adviser, Dominic Cummings.

A Downing Street spokesman told the BBC it was "currently processing the verdict."

The idea of Parliament meeting tomorrow seems a little strange when the Commons would never sit on the day of a Labour leader’s party conference speech.

​​Opponents of the Prime Minister, including prominent Remainer Gina Miller, had argued he had overstepped the mark legally when he prorogued Parliament.

Let’s get back to business. Parliament should reopen immediately. We also need a clear statement from Boris Johnson that he will not try any other dodgy tricks to suspend Parliament for a second time.

​Mr Johnson has even been accused of lying to the Queen about the reasons for the suspension of Parliament, something he has strenuously denied.

It is a glorious and precious moment that I hadn’t dare to expect. Parliamentary democracy has been reasserted. Even in our unwritten constitution checks and balances work.There is an independent judiciary.Johnson cannot ask for a second prorogation without compromising the Queen

​​The Supreme Court issued rulings on two legal challenges - one by Gina Miller’s team and one by the government, appealing against the ruling of the Court of Sessions in Edinburgh, which ruled last week Mr Johnson had acted “unlawfully”.

Clear, historic and unanimous judgment from the Supreme Court. Boris Johnson acted unlawfully in proroguing Parliament because he didn’t want us holding him to account. I look forward to the House of Commons returning as soon as possible.

​On Tuesday, 17 September, Lord Pannick QC argued the prime minister had suspended Parliament to avoid MPs “frustrating or damaging” his plans to push through a no-deal Brexit.

At least one big relief in the Brexit saga: the rule of law in the UK is alive & kicking. Parliaments should never be silenced in a real democracy.

I never want to hear Boris Johnson or any other Brexiteer say again that the European Union is undemocratic.

​​But the Advocate General for Scotland, Lord Keen QC, leading the government’s legal team, said the prime minister was "entitled" to suspend Parliament and the judiciary should not overrule the executive.

Supreme Court ruled @UKParliament never was #prorogued
We never voted for the conference recess - so it’s back into the chamber ASAP to hold this appalling Government to account pic.twitter.com/ScXgFGKQHh

​​Mr Johnson announced in August he planned to prorogue Parliament for five weeks between early September and 14 October, in order to pave the way for a Queen's Speech to outline the government's legislative plans.

Lord Pannick argued the suspension was simply to “silence” opponents of his Brexit strategy.

Essence of Sir James Eadie’s arguments for govt is there are no judicial & manageable standards against which PM’s advice to HMQ to prorogue can be assessed, & that it is not constitutionally appropriate for the courts to seek to do so, since political resolution, not judicial.

​On Wednesday, 18 September, government lawyer Sir James Eadie QC addressed the question of "justiciability" and said Gina Miller and SNP MP Joanna Cherry, who brought the case in Scotland, could not point to a single law he had broken in suspending Parliament.

Sir James said Parliament had passed legislation governing some aspects of prorogation but none involving the circumstances in which Mr Johnson passed the order.

If only we all had Dominic Cummings' political genius. He's got the Tory party just where he wanted it. Classic