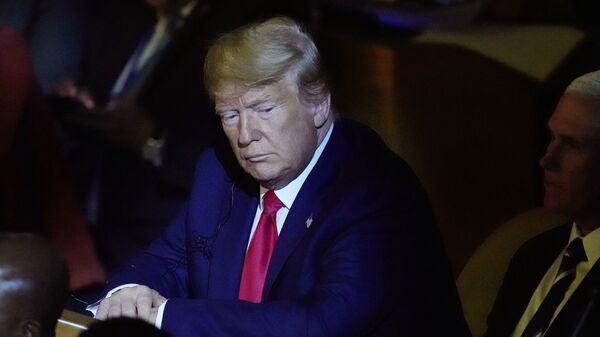 Both spoke about the recent developments in Indian-administered Kashmir, with Khan cautioning Trump about "the beginning of a crisis."

Some netizens saw the humour in Khan’s remark, while others were less charitable about the comments by the two heads of state.

@TimesNow Did anyone observe that Imran Khan is carrying a string of beads in his left hand, and he was constantly moving them when talking to Trump. Is it faith or black magic at play ??

If it's in reference to Imran Trump meet, if yes then Perhaps you've not heard him correctly, virtually he mocked Imran and Pakistani media over Kashmir and India as aggressor.
Watch that footage again... https://t.co/FbBuS5BkDT

USA Should stop all Aid to TERROR SUPPORTER @ImranKhanPTI
Our Friend @POTUS @realDonaldTrump Should Take Note of what Imran said.
cc@PMOIndia

Many countries wanted to meet me me. But out of all it is a great honor for me to meet PM Imran Khan.-President Trump
The PM of Pakistan scores massive admiration in USA. #ManOfPeaceImranKhan

Specifically referring to Kashmir, President Trump said: "I think I would be an extremely good arbitrator. I've done it before, believe it or not. And I've never failed as an arbitrator. I've been asked to arbitrate disputes — pretty big ones — from ... friends.”

Trump met with Khan on Monday, a day after attending the “Howdy Modi” rally in Houston with Indian Prime Minister Narendra Modi.

The Trump-Khan meeting was the second one since July when the US president offered to mediate the decades-long Kashmir conflict.

Trump also held phone talks with the Pakistani and Indian prime ministers in August when the Kashmir crisis was at its height.

Relations between nuclear-armed Pakistan and India have plummeted since the Indian parliament scrapped the special status granted to Jammu and Kashmir state.

The stripping of this special quasi-autonomous status was followed up by another announcement that Jammu and Kashmir and Ladakh would be separate federal government administered union territories.

Islamabad rejected the Indian move, calling it a direct violation of the UN Resolutions on Kashmir and the bilateral Simla Agreement of 1972. It downgraded diplomatic relations and suspended trade with New Delhi.

India and Pakistan have fought two wars over Kashmir since gaining independence from British colonial rule in 1947.