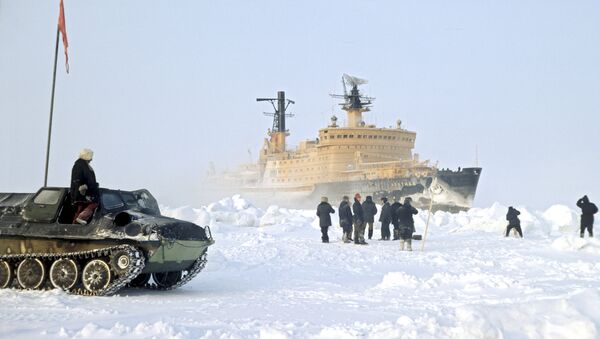 © Sputnik / Yuriy Lushin
/
Go to the photo bank
Subscribe
MOSCOW,(Sputnik) - The Russian Space Systems company, together with the Polar Initiative scientific and information centre, have developed requirements for receivers of satellite navigation systems for use in the Arctic, the company, which is a part of State Space Corporation Roscosmos, said.

"The relevant state standard (GOST) is planned to be submitted to Rosstandart [Federal Agency on Technical Regulating and Metrology] for approval before the end of this year. Its adoption will become the foundation for the further development of the Russian navigation infrastructure of the Northern Sea Route, the implementation of other state-scale projects in the Arctic region," the statement said.

The new GOST defines the technical requirements for the software of geodetic equipment, its reliability characteristics and meteorological support, as well as for measures of protection against electromagnetic interference and destabilising effects of geographical and climatic conditions.

"The operation of satellite navigation equipment in the Arctic region has a number of features, while there are still no rules and regulations for manufacturers and users of 'Arctic' navigation equipment. We were the first to develop an appropriate scientific and legal framework from the very beginning," deputy head of the Russian Space Systems' innovations centre, Valery Glushakov, said, as quoted by the company's press service.

Experts say that they have decided first of all to standardise the geodetic equipment to facilitate the work that is already underway in the Arctic — large-scale construction projects and infrastructure projects.

In the future, Russian Space Systems and Polar Initiative will begin working on the creation of "Arctic" standards for portable and airborne navigation receivers.