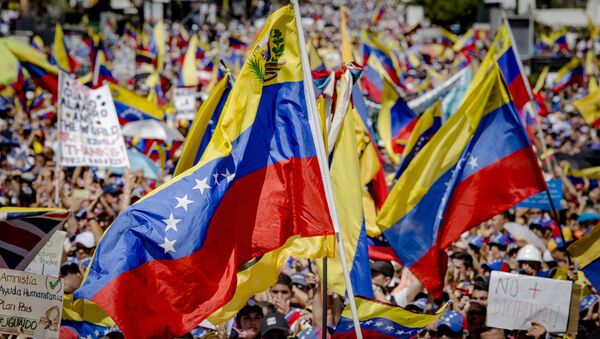 © Sputnik / Leo Alvarez
/
Go to the mediabank
Subscribe
International
India
Africa
The inter-American treaty was invoked last month following a request from Washington. Under the treaty, allies are allowed to prosecute or extradite Venezuelan nationals designated as “involved in crimes.”

A number of Latin American countries voted Monday to activate the Inter-American Treaty of Reciprocal Assistance, known as TIAR, or Rio treaty, against Venezuela, responding to an earlier request by the United States, Venezuela's opposition leader Juan Guaido's National Communication Center announced in a tweet.

​The treaty nations voted 16 to 1 in favor of activating the treaty. Uruguay was the only nation that voted against, while Trinidad and Tobago abstained. Cuba did not vote because it does not participate in the treaty, despite formally remaining a signatory.

The treaty allows member countries to "identify and designate persons and entities" related to Nicolas Maduro's government "involved in crime networks," according to Colombian Foreign Minister Carlos Holmes. The treaty parties can sanction or extradite identified officials or seize their assets, Holmes said.

The treaty was invoked by the US, citing “bellicose” moves by the Maduro administration; the invocation cited a Venezuelan military exercise near the Colombian border and Maduro’s alleged support to Colombia’s opposition FARC group, despite Caracas’s pledge to help Bogota make peace with FARC. Venezuela’s military exercises began as a protective measure against training camps set next to the border which Caracas claims trains attackers against the government.

According to Holmes, military invasion in Venezuela was not discussed at the meeting.

"During the meeting, there was no discussion regarding a military intervention in Venezuela. We discussed a resolution project which was eventually accepted," Holmes said.

Venezuela reacted to the vote by sending a diplomatic note to the Russian UN delegation, as Russia presides over the UN Security Council this year. The note “explains all the danger and illegality” of calling for TIAR implementation against Caracas, according to Venezuela's Foreign Ministry.

The United States and its allies support opposition leader Juan Guaido, who appointed himself “interim president” of Venezuela in January and since then has sought to orchestrate a coup d’etat, but has so far failed. Venezuela’s President Nicolas Maduro, who won the nation’s 2018 presidential elections, enjoys the support of Russia, China, Turkey and a number of other nations.