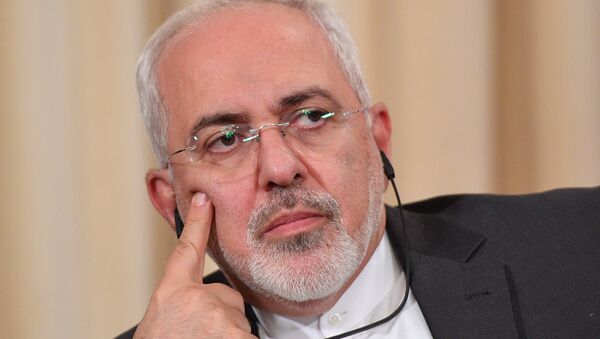 © Sputnik / Ramil Sitdikov
/
Go to the mediabank
Subscribe
International
India
Africa
Svetlana Ekimenko
All materialsWrite to the author
Iranian Foreign Minister Mohammad Javad Zarif is currently attending the UN General Assembly. The global debate has been overshadowed as the US has slapped fresh sanctions against Iran; Riyadh and Washington have blamed Tehran for the Saudi oil facilities attack, despite Iranian officials vehemently denying responsibility.

Iran's Foreign Minister Mohammad Javad Zarif has condemned the United States’ aggressive stance towards the Islamic Republic, noting that Iranians cannot be brought to their knees by pressure such as Washington’s economic war against Tehran through the re-imposition of tough sanctions.

Zarif, currently in New York to attend the 74th session of the United Nations General Assembly, spoke in an interview with National Public Radio (NPR) on Sunday; the text was published on NPR’s website on Monday.

Referring to the forthcoming meeting between Iran and the four remaining members of the P5+1 group – the UK, France, Russia, and China plus Germany set for 25 September, Zarif said:

“Four of the five permanent members [of the UN Security Council] plus Germany will be seated around the table along with me and the High Representative of the European Union. There is an empty chair there for the United States, but there is a ticket for that chair and that is to be law-abiding.”

Iran’s top diplomat also said that Washington could have a much better deal with Iran if it entered negotiations based on mutual respect and on moving forward.

The current UN General Assembly convenes against the backdrop of a heightened risk of a dangerous new conflict in the Middle East, as leaders of France, Germany and the United Kingdom on Monday blamed Iran for a recent attack on oil facilities in Saudi Arabia.

“It is clear to us that Iran bears responsibility for this attack. There is no other plausible explanation. We support ongoing investigations to establish further details,” the leaders said in a joint statement after meeting on the sidelines of the event.

Iranian officials have repeatedly denied involvement in the drone strike, and warned the West against any reprisal. Rouhani has said the attack was a warning to Saudi Arabia from Yemen over the Saudi kingdom's role in Yemen's civil war.

Yemen has been engulfed in an armed conflict between government forces led by President Abd Rabbuh Mansur Hadi and the Houthi rebels for several years, with the Saudi-led coalition carrying out airstrikes against the Houthis at Hadi's request since March 2015.

Although Yemen's Houthi rebels subsequently claimed responsibility, Riyadh and Washington have pointed the finger of blame at Iran.

US President Donald Trump pronounced his country "locked and loaded" in response to the attack. 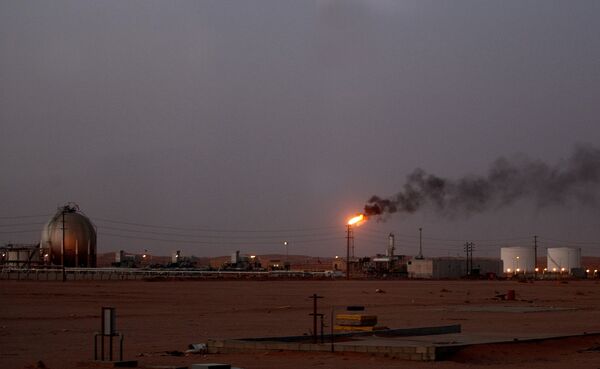 A flame from a Saudi Aramco (the national oil company) oil installation known as "Pump 3" burns brightly during sunset in the Saudi Arabian desert near the oil-rich area Al-Khurais, 160 kms east of the capital Riyadh
© AFP 2023 / MARWAN NAAMAN

Trump announced a series of stepped-up sanctions intended to punish Tehran and further toughen US "maximum pressure" policy toward Iran.

Tensions have been running high between Iran and the United States since May 2018, when US President Donald Trump unilaterally withdrew his country from a multilateral nuclear deal with Iran, officially known as the Joint Comprehensive Plan of Action (JCPOA).

The deal was signed in 2015 by Iran and six world powers, including the United States, France, Britain, China, Russia, and Germany, which saw nuclear-related sanctions against Iran lifted in exchange for curbs on Tehran's nuclear programme.

Trump lambasted the JCPOA as "the worst deal ever negotiated.”

In retaliation to the US withdrawal, Tehran has rolled back on its nuclear commitments three times, in compliance with articles 26 and 36 of the JCPOA. 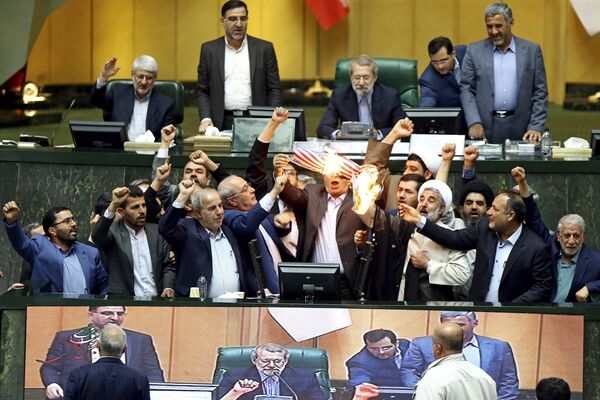 Iranian lawmakers burn two pieces of papers representing the U.S. flag and the nuclear deal as they chant slogans against the U.S. at the parliament in Tehran, Iran, Wednesday, May 9, 2018
© AP Photo /

Iran's Foreign Minister Mohammad Javad Zarif said in August the country would not renegotiate its 2015 nuclear deal with world powers, but is open to talks on finding ways to implement the existing accord.

"We are ready to talk and consult with others on how to best implement this deal. We are talking about Europe coming to comply with its own obligations under the deal," said Zarif.